This past weekend at the Langhorne Family reunion, I heard wonderful family stories and renewed relationships with many family members I hadn’t seen in years! I am looking forward to sharing some of those stories with you. One of those is about three cousins, all of whom are geophysicists! Two of these cousins are alive and well and were at the reunion, one is deceased, but his daughter was present giving us a glimpse of him I suspect.


I think it is remarkable that we have three geophysicists in our one branch of the Langhorne Family! All three descend from their shared great or 2nd great grandparents– James Steptoe Langhorne and his wife Elizabeth Rachel Omohundro. There must have been some strong intellectual genes in that family!

A geophysicist is a scientist who studies “the branch of geology that deals with the physics of the earth and its atmosphere, including oceanography, seismology, volcanology, and geomagnetism.” (click for source)

In our family, Roger Buck, PhD teaches and leads research at Columbia University’s Lamont-Doherty Earth Observatory, Columbia University. This is what Roger says on his profile page for the Institute where he works: “I believe theorists need to get out and see where the data come from. In recent years I have been fortunate to participate in such diverse field work as collecting rock samples for radiometric dating in Egypt and in the Mojave Desert, diving on the Reykjanes Mid-Ocean Ridge in a Russian submersible, and helping with GPS surveys on Iceland.”  Pat Spangler, PhD, is retired from the University of Florida, and thus his title is now Associate Professor Emeritus of Geology. Pat and Roger met for the first time at the Langhorne reunion this past weekend! They have both published extensively and have traveled the world teaching and researching! Their stories of Ethiopia, Australia, and the Pacific Ocean are amazing! Earthquakes! Earthquakes under the ocean!
At the reunion was another cousin from Oklahoma, an attorney in her own right, Sarah Houchins Stuhr. Her Dad, Guy Maurice Houchins Jr. is deceased now, but lo and behold, he is our third geophysicist! He served as a “Geophysical Engineer for Amoco Corporation all of his career. He retired as the Manager of Exploration Systems, responsible for exploration, computer application development, and seismic data processing.” –from a personal letter written by Guy M. Houchins, Jr. July 20, 2004, and provided by his daughter. The way they talk, it sounds like they all pretty much researched similar things, and I stand amazed at their abilities! Along with other family members, they speak well for our ancestors. As the children and grandchildren of sisters, their relationships look like this:

James Steptoe Langhorne– 11 September,1822– 4 December, 1905 –was my maternal 2nd Great Grandfather.  The Langhornes were our “claim to fame” as far as our family relations! At least that is what we were raised to believe! My mother was one of six girls, and three of them carried the Langhorne name as a middle name, Mom carried Steptoe as her middle name—and named one of my brothers Langhorne as well!  Now that I have done a few years of research, yes, the Langhornes were impressive as a family, but we are blessed with a rich heritage of ancestors.

Lady Astor—Nancy Witcher Langhorne Astor was probably the most famous Langhorne.   She is my second cousin, the grandchild of Steptoe’s brother John. In another post I’ll explain how helpful she was to my family directly.

Originally, the Langhorne family was from Wales. The first in our line to come to America was John Langhorne, who arrived in Warwick, Virginia –the Royal Colony—in 1666 with his wife Rebecca Carter. They built a 2000 acre plantation with a home overlooking the James River, and named it Gambell.  It was located where the city of Newport News, Virginia is today.

Fast forward, 100 years to his namesake John Scarsbrooke Langhorne, who was born in 1760 on the very same plantation, Gambell.  By the time this John Scarsbrooke Langhorne died, he owned several plantations, and his son Henry increased their holdings significantly. According to family history, Henry let his son James Steptoe Langhorne choose one of the plantations, and after touring them all, James Steptoe, age about 22, looked out over the 13, 000 acre “Langdale” plantation in Meadows of Dan, Virginia , and said it was the most beautiful sight he had ever seen! In fact, he is credited with giving that area its name, Meadows of Dan—located in the foothills of Virginia’s Blue Ridge Mountains, on the Dan River. He chose to settle there, but was blinded by retinitis  pigmentosa – an inherited  family disease– within just a couple of years—and never  actually saw his beloved land again! 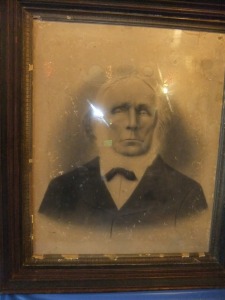 James Steptoe Langhorne, called “Grandpa Steptoe” by his grandchildren, married Elizabeth Rachel Omohundro and together they had eight children, and adopted at least two more.  Of course, on a 13,000 acre plantation in 1822 Virginia, Grandpa Steptoe owned slaves. It doesn’t matter how abhorrent and embarrassing this practice might be to me today, it is a part of our history. Most of the area around the plantation was settled by small independent farmers of Scotch Irish descent. James Steptoe Langhorne and his wife are credited with the gifting of land and money to found  two churches in the area, and indeed, they are buried in the cemetery at Meadows of Dan Baptist Church, one of these churches. According to family history, they also held Sunday school and regular school classes on the plantation for area children. My understanding is that Elizabeth Rachel Omohundro was a very devout woman who was dedicated to her Sunday school outreach.

When Grandpa Steptoe’s first born son, Henry Ellis was sixteen, 1849-1865, he drowned in a pond on the property. The story was told to me by one of my cousins who still lives in that area, Harvey Langhorne Spangler. Apparently, one of the horses had a bad case of colic, and the common practice to help heal the condition, was to help a horse swim off the cramps. Henry Ellis we are told took the horse into the millpond with that very intention! Unfortunately, he did not realize just how deep the pond was, and he and the horse were soon in trouble, unable to stay afloat or climb out of the water! Steptoe was right there, but blind long before this, he couldn’t see exactly what was happening with his son.  Still, he dived into the pond to try to save his Henry!  We are told that Grandpa Steptoe dived again and again trying to find Henry and bring him to safety! Tragically, by the time Steptoe did find him, Henry was gone—the end of an all too shortened life! Blind, one son drowned…what else?

During the Civil War there was an incident, where the Union Army came through the Meadows of Dan. In 1935, Steptoe’s daughter Fannie, (Frances Eunice Langhorne who later married Wallace Wolford Spangler and became the parents of Tump Spangler whom  I wrote about before,  here if you’d like to see it:  https://heartofasouthernwoman.wordpress.com/2013/08/20/the-spangler-reunion-part-2-charles-langhorne-tump-spangler/ ) gave an interview about this very thing that was written up by Charles F. Adams  in a local magazine called The Mountain Laurel.

“At the time Miss Fanny Langhorne was ten, and the Civil War was being fought, Stoneman brought his Yankee army from Tennessee down what is now the J.E.B. Stuart highway. In passing they annexed one of Mr. Langhorne’s horses which happened to be his favorite. He, though blind, accompanied by his small daughter Fanny, insisted on following the army to Stuart in search of his horse. There the captain agreed to allow him to retrieve his horse if he could recognize him. Mr. Langhorne set Fanny to hunt the animal. After walking down the long line of horses hitched to the racks along the road and back again, she was unable to find him. On her return, however at one side, away from the rest, she saw her father’s mount and immediately squealed in delight. Mr. Langhorne was led over to a tall roan mare, not his, but near the one Fanny had discovered, and told to see if that were his. Fanny squealed to the contrary, but Mr. Langhorne turned to her and said, “You don’t understand the joke”. Then his hand was placed on another, his own; this time he said, “This is my horse, but not my bridle”.   (If you’d like, you can find this story here: http://www.mtnlaurel.com/mountain-memories/406-fannie-langhorne-spangler-an-interview-from-1935.html   That took courage and audacity, on his and young Fannie’s part! (This story was originally told to me by brothers, and Fannie’s grandsons: Harvey Langhorne Spangler and Dr. Daniel Patrick Spangler, PhD)

There are many other stories, but one dearest to my heart, is Steptoe’s loss of his daughter Evelyn, my great grandmother. Married at just 15, with seven children already, one dead, Evelyn died in childbirth in 1900 as did the twins she was birthing!  I have written of this tragic event in an earlier blog post which can be found by clicking on this link:  https://heartofasouthernwoman.wordpress.com/2013/06/03/one-tragic-day-in-october-a-true-story/

My own maternal grandmother, Kate Houchins Kerse, Evelyn’s daughter,  was living with Grandpa Steptoe and Grandmother Elizabeth after her mother died, when alas the house burned to the ground! What else could happen to this family!

I wanted to know more about Grandpa Steptoe’s history and personality, and I learned that he was a loving man, committed to his family and his church.. He was also an angry man at times—ruthlessly ejecting “squatters” from his land! His morals were high, his sense of right and wrong perhaps rigid at times. Born into wealth, but living through war and family tragedy, he is an interesting ancestor, my 2nd great grandfather– I’m proud to be kin to him.

I’m also pleased to be partof this 52 ancestors in 52 weeks challenge! It is encouraging me to get the stories down onpaper as I have been wanting to do! Thanks to Amy Johnson Crow of “No Story Too Small”for leading us in this challenge! http://www.nostorytoosmall.com/posts/george-debolt-old-school-baptist-minister-52-ancestors-3/          Helen