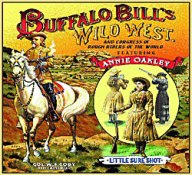 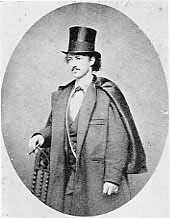 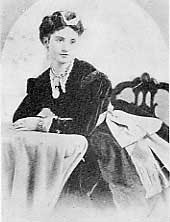 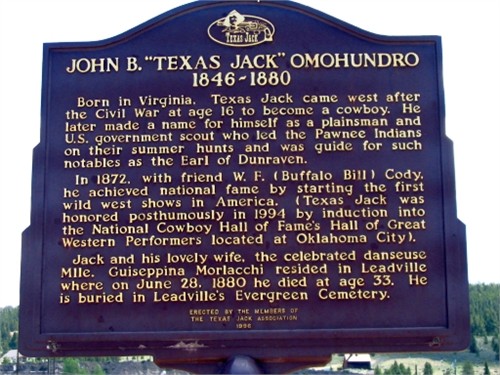 Can you imagine how surprised and thrilled I was to discover I had a real live cowboy in my family tree–and he was  famous as well!  Like so many children of the 1950’s, I grew up immersed in Roy Rogers, Dale Evans, the Lone Ranger, and Buffalo Bill.  Now I had my own cowboy!  “Texas Jack” was born  John Baker Omohundro and is my second cousin 3 x removed, as you can see in the relationship chart below.

is your 2nd cousin 3x removed
John Burwell Omohundro (1816 – 1901)
father of John Baker “Texas Jack” Omohundro
Richard Omohundro V (1777 – 1860)
father of John Burwell Omohundro
Elizabeth Muse (1748 – 1809)
mother of Richard Omohundro V
Ellis Putney Omohundro (1790 – 1852)
son of Elizabeth Muse
Elizabeth Rachael Omohundro (1825 – 1915)
daughter of Ellis Putney Omohundro
Evaline Langhorne (1866 – 1900)
daughter of Elizabeth Rachael Omohundro
Katherine Steptoe Houchins (1883 – 1943)
daughter of Evaline Langhorne
Margaret Steptoe Kerse (1918 – 1980)
daughter of Katherine Steptoe Houchins
Helen Spear Youngblood Holshouser
You are the daughter of Margaret Steptoe Kerse
John Baker Omohundro was born July 26, 1846 in Palmyra, Fluvanna County, Virginia, which is only about 40 miles west of Richmond,Va. where I grew up.  He was the son of John Burwell Omohundro and his wife Catherine S. Baker. At the tender age of 15 or 16 Jack, as he was called, left home for Texas  with  very little to his nane but  a horse,rifle, revolver, and $90.00 cash, we are told.  In Texas he worked on ranches and learned to be a cowboy–herding cattle, tracking, roping–and excelled at all the skills! When the Civil War started he returned to his beloved Virginia and fought in the Confederate Army under the command of JEB Stuart. Jack’s amazing marksmanship, and his tracking ability soon landed him the position of  Scout. After the war, Jack returned to the western plains of America, , where he enlisted as a scout in the service of the United States Government Calvary in the Indian Wars.  He served for a while under the command of General Custer, rode the old Chisholm Trail, and was captured by Indians ! Jack Omohundro was an expert guide and tracker who was sought out by many famous leaders . In those years, he picked up the nickname “Texas Jack” and it stuck to him like glue! At one point during his journeys, Jack  met James Butler-Wild Bill Hickok who introduced him to William Cody, “Buffalo Bill”.  Jack became close friends with both of these men  for the rest of his short life.
Texas Jack joined Buffalo Bill in the very first “Wild West Show”  in 1872! The show was originally called “Scouts of the Prairie”, later “Scouts of the Plains”. The drama and skill displays  were so popular that they were soon booked all over the country! While in New York, Jack began to write stories of his adventures for the New York newspapers. He also fell in love! Although it may have seemed like an unlikely match, he married an Italian Opera Star and ballerina named Mile. Josephine G. Morlacchi.  After 1876,Jack left his own dramatic pursuits with Bill Cody,and began touring with his wife! Unfortunately, in 1880, just shy of his 34th birthday, the talented Texas Jack caught pneumonia and died! He is buried where he died in Leadville, Colorado. Twenty- eight years after his death, Jack’s friend, William F. Cody, “Buffalo Bill”  placed a new stone on Jack’s  gravesite, and made a touching tribute to Texas Jack: “Texas Jack was an old friend of mine…I learned to know him and respect his bravery and ability…he was a whole souled, brave, generous and good-hearted man.”
Today there is a Texas Jack Association —and the brochure introduces their association with these words:
“WELCOME    The Texas Jack Association is a non-profit organization that commemorates John B. “Texas Jack” Omohundro, cowboy, prairie scout, western hunting guide, Wild West showman, and partner of W. F. “Buffalo Bill” Cody and James B. “Wild Bill” Hickok.In his day, Texas Jack was a nationally known figure, however he is largely unknown today because he died at the young age of 33. The Texas Jack Association exists to rectify this situation, perpetuate the memory of the “forgotten scout,” and see that he gets his deserved place in history. We are also passionate about the history of America’s West. We hope you’ll join us!Come to the 2014 Roundup in Virginia City, NV!”
Doesn’t that sound lke so much fun–makes me want to pull on my cowgirl boots, and practice up my two steppin”!
An adventurous and courageous life, an association to remember him, what else could there be? Well–amazingly  i discovered that there were many what were called “dime novels” written about the life of Texas Jack.  In 1891, eleven years after his death, two of the novels were published–one titled Texas Jack, The Mustang King and another called Texas Jack the Lasso King.   Both of these books were published as part of the Beadles Pocket Library. Even more exciting perhaps, was that in 1994–well over 100 years after his death–John Baker Omohundro-Texas Jack was inducted into the National Cowboy Hall of Fame in Oklahoma City, Oklahoma! The Cowboy Hall of Fame–road trip!
Who’s with me–let’s go live back in the Wild West–if only for a weekend! Dream about it–and have a great week! Helen