Since getting that treasure trove of unidentified family pictures, I learned of a new site that might help us with that on familysearch.., specifically at this link: Compare-a-face

You can do several very interesting things at this site! I believe it is designed to compare a picture of you, yourself to your ancestors, to see who you look like.  However, in this case, I wanted to compare some of the unknown family members to known family pictures and see if I could find matches! It worked, or at least gave us clues!  I do want to tell you, whenever you want to  make someone else, other than yourself, the face to be compared to–you must start a new trial.  That means leave the site, then sign back in, and upload a different person from yourself to compare with other pictures.  Now, that may seem complicated, but family search has great instructions on their site, and  you will have no trouble following them!

As I was beginning to learn to use this site, I first used pictures of people whose identity I knew. Let me show you some examples. It was gratifying to see high scores when I compared  known people when they were young and older.  The comparisons are scored in similarity on a 100% (meaning identical) scale.  The best scores I found were like 91% and similarly.  I did find some matches, people I knew, where they were only matched at about 60%.   I learned that those matching in the 20’s and 30%’s were probably NOT matches. Others, higher, warranted more investigation. Let me show you some examples:

The program recognized me– on my wedding day, aged 22, compared to my current 70 year-old self!  Amazing!

So, how does this help us identify our unidentified pictures?  Well look!  It’s exciting! The drawback of course, is you have to have a KNOWN photograph of a person in order to compare them with an unknown picture and see if you get a match.  So I did what I could!

The first picture below  is a known picture of my Father’s sister, my Aunt Helen Marie Youngblood  (1907-1978) who married first Edward Riddick Webb, and second George Frederick Combs. In the recent treasure trove of pictures my sister found, two were identified, the second one below is one of those, and was identified as this same woman– my Aunt Helen Marie Youngblood, in about 1922 which would make her about 15 years old when standing with her horse on the family farm in  Colonial Heights, Virginia. 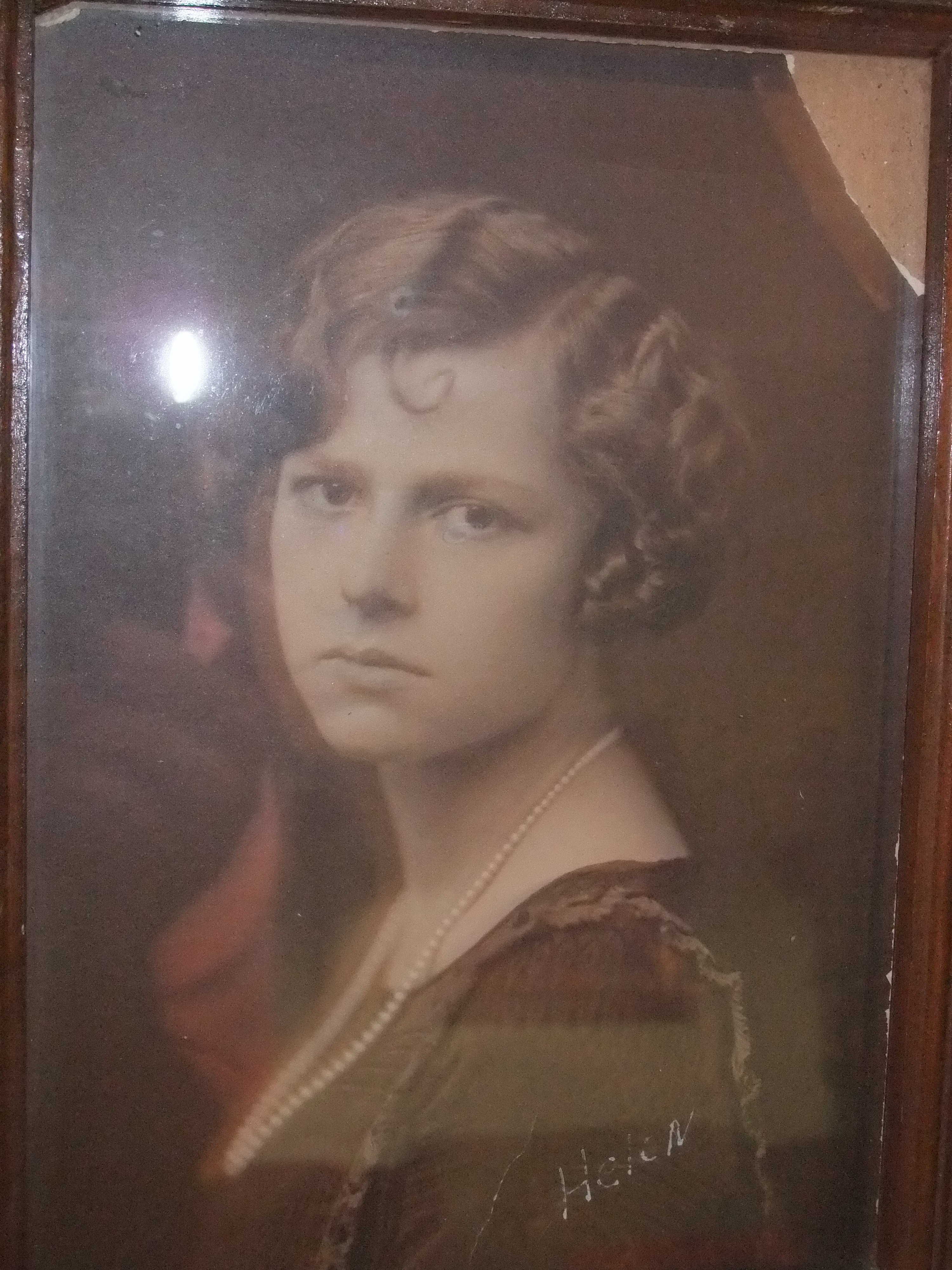 This picture on the right was one of the unidentified.  Because of the snow, the website Compare- a -Face will not use this photo.  However, if you compare it to the one with Aunt Helen Marie Youngblood (1907-1978) and her horse above, it seems like a definite match to me!  What do you think?   Then look below where the website compared two known pictures of Helen Marie Youngblood (1907-1978) and they say yes,they are a match!

Now look, this helped me find the identify of some of the unknown pictures! I started by uploading to the familysearch, Compare- a -Face site a known picture of Aunt Helen,.  Next I compared at least two other pictures from the album of unidentified pictures, ones that a cousin guessed might be her. Yes!

I wondered if this pic above  might be my Aunts Gwendolyn (l) and Helen (r) Youngblood, sisters of my father.

My cousin Tracy Pender told me that she believed the woman in the front row of this picture below, third from the left, was also my Aunt Helen Marie Youngblood–her Great-Grandmother. I could see the family resemblance. Just look at the original picture, then the comparison with a known picture of Helen Marie Youngblood!  They match at 83%–it must be her!

Do you see the picture above of two ladies in coats and hats–the one I labeled as possibly being my Aunts–sisters–Gwendolyn and Helen Youngblood?  Well, from my experience, a 72% match between a known picture of my Aunt Helen and the shorter lady, proves that she is indeed my Aunt Helen!

My Aunt Gwendolyn was always tall and slim.  I guessed that was her with her sister Helen in the picture of the ladies in coats and hats.  I found a couple of pictures that I knew were Aunt Gwendolyn and used those to compare.  Here are two KNOWN pictures of Gwendolyn compared: (only 59%?)

Now below is one known picture of Aunt Gwendolyn compared to the tall, slim woman in the coat and hat with  who we decided was her sister Helen Marie Youngblood: (only 34%!  That’s crazy!  I can’t imagine who else this might be!)

And …below is the same known picture of Aunt Gwendolyn Youngblood Tucker compared to a different one of the unknown pictures that several of us thought surely must be Aunt Gwendolyn when she was young–she was so attractive, tall ,slim and fun!  But no–the Compare a – Face says known Aunt Gwendolyn and this pretty lady are only a 26% match!  Below that is the two unknown, but guessed Aunt Gwendolyn pictures compare at 91% –so they are the same person for sure, but perhaps not Aunt Gwendolyn!   Wow!

With all these comparisons, what conclusions can we safely draw?

I believe that so far, considering the pictures examined in this one blog post, the only positive conclusion we can draw is that the shorter lady on the right in this unidentified picture of the tow  women in coats and hats, is certainly Helen Marie Youngblood Webb Combs! This is a lot of work!  More in the next blog post.

2 thoughts on “Family Pictures Found, Part 2–Who Are They? Ideas for Figuring That Out”