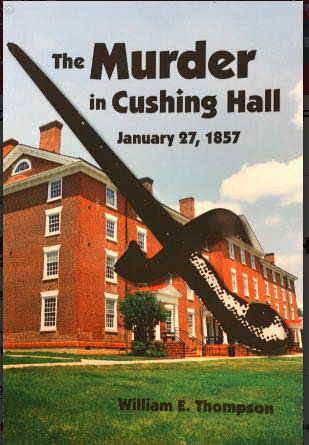 There was a murder–162 years ago– January 27, 1857, at a private, all- male college in Virginia– Hampden Sydney College.   I had never heard of the event until three days ago.  I traveled to my sister’s home, in Richmond, Virginia–er husband and son attended Hampden Suydney.  She showed me an alumni magazine with this story featured on  the cover!  Since the man who was accused of murder was one Edward “Ned” Alexander Langhorne, we were all interested in discovering whether or not he was related to us. (the Langhorne family is on my mother’s side of the family.)

When I got home, I researched  him with the help of my daughter Annie Holshouser.  What a surprise to learn that  he was a fairly close family member–he was my 3rd great Uncle, actually a half- Uncle on my mother’s side of the family. . Sadly, the other Hampden Sydney student he murdered was his best friend!  How tragic, they were only 18, both lives ruined!  The student who died was named Charles Taylor Edie–I thought to myself, “Edie sounds familiar…oh my  gracious–suppose he is related to us also? ”  And of course, he is–a 2nd cousin five times removed, on my Father’s side of the family!  Oh my gracious, oh my gracious!

The story goes that on the morning of January 27, 1857, Ned went to confront his “best friend” Charles over his behavior towards a young woman and Ned himself, the night before.  It is said that Charles had been drinking heavily the night before. It is also said that Charles was stronger, bigger and tougher than Ned, so Ned’s other friends had encouraged him to carry a weapon in case he needed to protect himself, if he was to confront the fearsome Charles–his BEST FRIEND!  But Ned was a “gentleman”, who could not disobey the “Honor Code” which demanded a duel in response to such humiliation as Charles had dished out to him. So…Ned carries a borrowed knife and a pistol to go and confront his friend!  Really? There are many details to this story…I will tell you where you can read them for yourself!  It is quite a story!

Of course, hungover college boys are dangerous when tempers flare and friends egg you on! Can’t  you hear the  the chants…”fight, fight!” Fight they did, punching, kicking and finally–stabbing–right through the heart the knife went!  The life of Charles Edie,  age 18, was ended by Edward Langhorne!

Ned was arrested of course and placed in jail! His trial took place on March 13, 1857.  Many people testified on his behalf, although many , including ministers in the community denounced him and the Honor Code of Dueling!  In his book, The Virginia Langhornes, 2013, Blackwell Press, Lynchburg, Virginia, pg. 210, author James Callaway Langhorne gives this great description: Ned’s “subsequent murder trial was one of the great legal spectacles of antebellum Virginia. Although he was acquitted to “such cheering that the judge had to clear the courtroom in order to restore order and discharge the jury,” the incident colored the remainder of his short life!”

Let me tell you a bit about both of  these “boys”. Charles Edie, was born in 1838, in Christiansburg, Montgomery County, Virginia, USA.  His parents were Dr. Joseph Speers Edie, M.D. who had previously taught at Hamden Sydney, and later anguished between earning his doctorate of divinity as he felt called to the ministry, or getting a medical degree as he also felt strongly called to heal.  He was the local doctor in town for many years! His reputation was that of a very kind man who served rich and poor with equal care and talent.   Charles’s mother was Elizabeth Randolph White Edie, of the famous Virginia Randolph family!  Can you imagine dedicating your life to healing others, but not being available to help your mortally wounded child!  What a nightmare!

Edward “Ned” Alexander Langhorne was born in 1837, the son of wealthy planter, miller, business tycoon and owner of multiple plantations throughout Virginia and other states–my third great-grandfather, Henry Scarsbrook Langhorne, 1790-1854.  Henry was married twice and Edward is the son of him and his second wife, Ann Eliza Scott.  My family descends from Henry and his first wife, Frances Callaway Steptoe through his son James Steptoe Langhorne, 1822, called “Grandpa Steptoe” and his wife Elizabeth Rachel Omohundro. Also descending from sons of Henry and Frances is the famous  Nancy Langhorne, Lady Astor, from her father Chiswell to his father John to Henry. (Sadly, we missed out on the wealth genes! LOL)

Now let’s look at some other family relationships/issues for a minute–and think about the warnings we’ve heard of cousins marrying and unlucky numbers, LOL Was Ned doomed to problems?  His parents were first cousins, oh dear.  He was one of 13 children!  Oh dear!  Then what…he married his own first cousin!  (“Lions Tigers and Bears, oh my!”)  What else could befall him… accused of murder…war…disease?  Wow!  Yes!  He went in service for the Civil War, and as a First Lieutenant for Company F, 28th Virginia Infantry, Confederate States of America, he fought at First Manasas, but died of Typhoid Fever on Christmas Day, 1861–three years after killing his “best friend”. He left behind a wife and two very small children!

How sad for two young men–and many more!

Above is a picture of a book by William E. Thompson on this “fatal affair”.

Hampden Sydney Colege–now and then.