Today I am publishing a treat for us, as we have a guest author.  My second cousin, Susan Walker Youngblood Kerr is joining me to share an amazing family story. Let me introduce her to you first.  Susan married Robert Kerr, called Bob, and together they have three young adult children, Lauren, Robert, and Ryan Kerr. Ryan is married to Katy. Born in Virginia, Susan was raised around the world as she traveled with her career military family with Dad a Colonel at retirement. After marriage, Susan and Robert settled in Iowa, very close to the Mississippi River where it intersects with the Des Moines River.  Susan has recently retired from a career in teaching, and Robert has farmed successfully for many years. 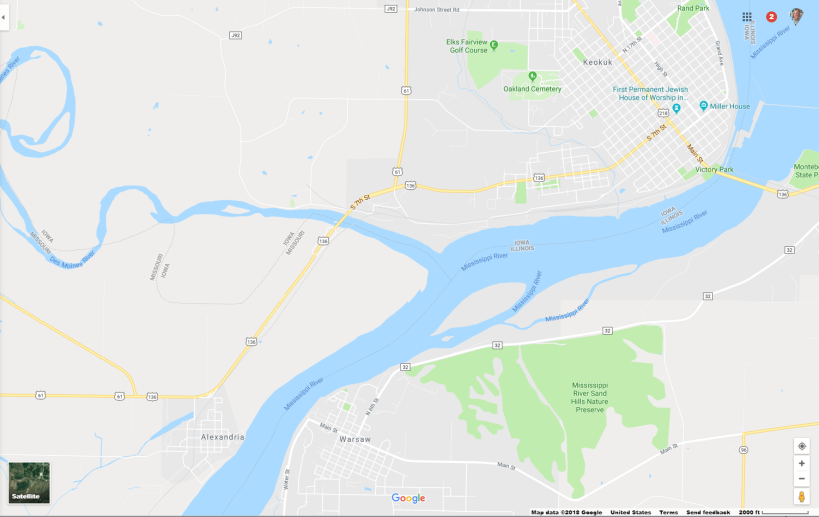 Susan tells this account of trial, tribulation, survival, patience, and as she describes: “God’s provision.”

“We had a saltbox wood- framed farmhouse, part of it built in the 1800’s. We had remodeled the house and added a downstairs master bedroom and bath with a full basement underneath the addition.  We had also added a computer room. The house was 2600 square feet on less than an acre. The Great Flood hit us ten years ago this month, June 15, 2008, but the story needs to begin in January 2008.  At that time, I was teaching, Bob was farming and the children were 14,16, and 18 years old.

In January 2008, I received an email at work that a family had a house fire and among items they needed were beds for their children. I had just bought full beds for my sons so I called my husband and he brought the twin beds over to the KEOKUK armory to give to a Sgt. Steffens. Sgt. Steffen was about a 6’ft 8 ‘’ guy that started crying when he received the beds the morning after the fire. He conversed with my husband and asked where we lived and farmed. My husband told him we lived and farmed on the Mississippi bottomland. Sgt. Steffen told Bob, my husband, that National guard had already been called out for a major flood on the Mississippi the following summer. We were in disbelief because we were at the end of a three-year drought! Barges were getting stuck and the river was less than five feet. An all-time low. Flood stage is 15 feet.

However, we watched the weather patterns closely. Flood insurance is very costly in the Midwest. About March there were huge storms up north. We started watching houses plunge into lakes in Wisconsin. We decided that it was time to get flood insurance. It took 2 months going through red tape to acquire flood insurance but we were finally insured on Bobs birthday, May 12th. This is important because you have to have flood insurance in place 30 days before the time the water enters your home.

We had to cancel our 20th wedding anniversary plans on June 11, 2008. There was a wall of water headed our way from Cedar Rapids, Iowa. The Des Moines River had flooded the entire bottom area of Cedar Rapids.  Our farm is several miles from where the Des Moines and the Mississippi River intersect.

The water was predicted to crest at 30 feet and our levee is built to hold up to 26 feet flood stage.  On June 15th, the water was actually 32 feet! The water came up under the Canton Dam and flooded the Hunt Drainage District which is 32,000 acres of farmland. What a shock and nightmare as we lost almost everything!

We were thankful, however, because we had gotten flood insurance. However, we were only insured 50 percent of the square footage. That is how flood insurance works. It doesn’t matter how old or new the structure is but how much based on $100.00 a square foot, it would cost to build a new house. We also had $20,000 coverage on contents but got some things out, so the assessors gave us $6,000 on contents. So, we had a check for $136,000 that we banked immediately. 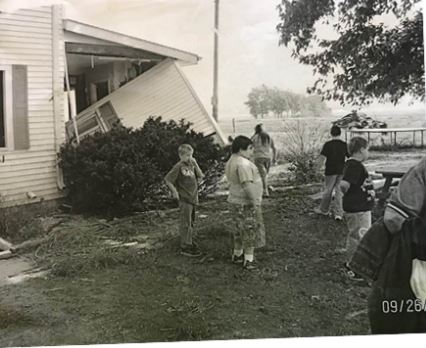 Believe it or not, we had been through the “once in a lifetime, 500- year flood” of 1993!  We had just closed on the farm in May, then get flooded in July. Bob was a contractor so put the home back together. But I had no interest in doing this a 3rd time. It all has to do with mismanagement of our river system. The Mississippi is silted in.

We moved into a house that was less than a mile away, up on the bluff road. It was basically a 1400 square foot FHA house with an added 4 car garage. The house had a black mold problem and they were asking $176,000 for it. No thank you. But the garage was great for moving our household items out. My eldest son started getting severe nosebleeds. His doctor told us to get the “ hell “ out of that house because it was killing him.

Under doctor’s orders, we moved again, to a house on the river above the dam, in Hamilton, Illinois. It was a log house but had been steel sided. The outside of the house was ugly but the inside was beautiful log with 20-foot ceilings, a stone fireplace, and a wood burning stove. The house was fairly close to my job (10 minutes) but was 30 minutes from the farm. We learned then that in order to be an effective farmer you have to live near the farm. We lived in this home for two Christmases. It was a great place to clear our heads and heal our hearts. The girl’s bathroom had this huge jacuzzi tub where you could sit in it and not see over the rim, it was so deep.  We loved this home and would have built one just like it, minus the siding, but location, location, location…. it was wrong.

We had a plot map and asked everyone in our area if they would sell us some land on the bluff. Nothing, absolutely nothing would open up. (All of our land is in the floodplain) we looked for 18 months!

One day we heard that a house on the bluff was in sheriff foreclosure. My husband had mowed the lawn there as a teenager. The house was padlocked but my husband knew the secret passage into the house and went in and looked around. We didn’t know who was handling the foreclosure so we called our county treasurer. She gave us the name of the realtor, Bert Berthound. We googled that odd name but nothing came up. I told my husband to try Gertrude. He did and the name of a realtor came up. We lost her trail in Hannibal, MO. My husband got the thought to trace who was paying the electric and water. He was told it was Century 21 out of Quincy, IL. He looked in the phone book and found five Century 21’s. On the 4th Century 21, he asked if there was a Gertrude Berthound. They said they had a Bertie Kunz. When he spoke to her she said Berthound was her name two marriages ago. The house was not on the market yet but she agreed to drive the 30 minutes to meet him.  A half-hour later, this little lady drives up in her pickup truck with Harley emblems emblazoned on it, a tough but nice person to work with. Bob took her down to see our flooded house. When they came back he wrote out an earnest check and made an offer on the house she was handling. Bert said, Bob. I believe you need to up your offer $50,000 to buy this house. Bob said he would like to stay with his offer and see what happened.

Bert called us a few days later to tell us that if we wanted the house, we needed to counter offer. Bob asked her what he should counter offer. She said “Bob, this has never happened in all of my years in foreclosure realty but the bank has a predetermined price. You need to redo your bid to $23,500 LESS than you originally offered!  Are you still interested? We about ran everybody off of the road to get to the bank and fax our new offer!

Amazingly, we closed and moved into the home in 30 days! Oh, we bought the house, with closing costs, for $136,000. Our flood insurance check was $136,000! We moved into a 3000 square foot brick house with an 800 ft., two-story sunroom, on 18 acres, on the bluff, overlooking our farmland! Included were custom drapes, lilacs, and an 80-foot blue spruce tree. We feel very blessed! All along, my husband spoke the one-word “patience” to me.  It has been 10 years since the levee broke June 15th, 2008. Don’t feel sorry for us or our house though. We came out pretty well even though it took two years of faith, patience, and perseverance!

I was a school teacher just a few weeks retired now. Ten years ago, I took my class to see the house after the waters receded. It took 2 years of patience but we have a testimony of Gods goodness through this. We had a 2300 wood frame farm house, on an acre of land (but surrounded by our farmland). We closed on a 3,000 ft. brick home with an 800 square foot two-story sunroom, on 18 acres.  We bought the home for the exact amount of our flood insurance check. This had to be a gift from God and is a testimony that can never be taken away from me. ”

Helen‘s note:  What an amazing story that resulted in a true blessing for a wonderful family! I cannot tell you how much I admire Susan and her family for their courage and faith!  They are an excellent example and light to many of us in our often-challenging world.  Thank you so much, Susan, for sharing all of this with us, the extended family and for generations to come.  Hopefully, it will stand as a great example to trust in God, to persevere, work hard, and have patience.

Until we meet again, I wish you all well,

Helen Youngblood Holshouser  —a Southern woman whose heart is family!

2 thoughts on “Surviving the Mississippi River Flood of 2008”