As many of you, my readers, know, I’ve been doing genealogical research for about five years now. It has become not only  my hobby, but my passion!  I can’t explain why delving into decades and centuries of ancestors is so satisfying for me. It’s the detective work that keeps me involved I think, intellectually, and the family captures my emotions. 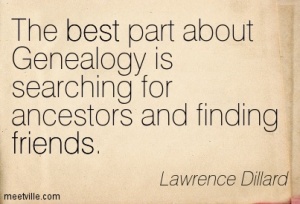 That saying by Lawrence Dillard is so true! Through my genealogical research I have met so many new cousins and friends, I cannot even count that high!  Today I want to tell you about one of those special people. (The names of her and her family have been changed to protect their privacy.)

About a year or so ago, a person named Albany got in touch with me through ancestry.com with an amazing story. Just like me, she had her, and her sister’s dna tested for genealogical research purposes. Both of her parents were deceased. However, when Albany’s dna came back, it said she and her sister were only half sisters! Surprise and shock set in.  Very soon however, curiosity came to the fore. She decided to look into this situation more seriously, and see what she could discover. She started by turning to her beloved older sister Abigail of course. They were both having to deal with all the ramifications of this news. Albany’s father, whom she’d adored all of her life, was not really her biological father! Had they lied to her? Did he know? Did her mother even know?  Did her mother deceive her Dad all those years? Quickly she discarded that idea. Her mother was just not the type of person to do that, being honest had always meant the world to her mother. More than likely when Albany was born in the 1950’s, there was just no way to tell who the father was. Her parents had reunited as well, so more than likely, they both believed the long awaited second child was theirs.

This is just a bit of what Albany wrote in her journal at that time: “A year ago, just minding my business, working on my genealogical research,  I took a DNA test along with my sister. Then, BAM! I discover that I am not my daddy’s biological daughter.  I was 58 years old when I made this discovery. All those years a big secret was carefully hidden from me.” Of course, Albany knows that it may not have been “hidden” from her, but we can’t help but consider that when discovering such a monumental secret. She says her mother was overprotective. Her mother may have not wanted her to deal with all of that, or like we said, she might not have known.

Other journal notes: “In trying to unravel the mystery, I talked to my sister, asking about anything at all that she could remember. She told me, that my parents were legally separated for awhile when she was young. During the time when my parents were separated,  she remembered  a man who made a very brief appearance in my mother’s life.

One evening some neighbors invited my mother to the VFW, and mother took my sister along. It was there mama met this man, “Danny.” After the VFW, Danny brought mama and my sister home and came inside for a while. My sister recalled that he was tall, nice-looking, friendly, and very, very charming. She learned that his last name was Mansfield.  A bit later he got up to leave, and mama walked outside with him, apparently just saying goodbye. In a while, my sister realized that mama had not come back inside, so she looked out the window and saw that Danny’s car was gone, and so was mama. She can’t recall how long mama was gone…maybe an hour or so, but for her it seemed like a very long time. Mama was extremely overprotective, and it was highly unusual for her to leave her daughter alone, especially at night.

After that, my sister vaguely recalls that she heard Danny’s name mentioned, maybe once or twice, but nothing more about him. Perhaps a few months later mama and daddy got back together, and I was born in December of that year. “

Why had Albany never, ever heard this before?  Well, as we realized, Abigail was young , and her parents got back together, so “all’s well that ends well”. That charming man just wasn’t important to a child anymore and was quickly forgotten!  Fast forward fifty-eight years to a dna test!  Albany was so shocked, and so worried about her family relationships and just everything, that she and her sister agreed to seek professional counseling together.  The counselor gave them some very practical insights, helped them discuss the difficult issues, and gave them resources. Albany and Abigail say they are glad they took that opportunity.

As the air around her cleared, Albany was determined to discover who her biological father was, and began to research vigorously. She enlisted help from other researchers as well, people skilled in dna, and people knowledgeable of the Johnson-Smith-Mansfield family. That’s how we connected! Albany belonged to ancestry.com and she found The Mansfield Family Tree I had researched for a cousin there! She wrote me a note asking if I might be interested in helping her search, and I readily volunteered, intrigued immediately. I was touched that this stranger would reach out to me, knowing that had to be difficult.

Albany had taken three different dna tests to aid us in this quest. She took one test from Family Tree DNA. She took another dna test from 23 and Me, and an autosomal dna test from ancestry.com. Each type of test gave her different types of results. If she’d had a brother it would have helped, y-dna from males usually traces the family line back efficiently. She would have had the information much more easily. As it turns out, she found cousins, lots of cousins!  The closest who weren’t identifiable as belonging to her mother’s family, were ones with names like Johnson and Smith. The closest being a second  cousin. We had that name Danny Mansfield as well. I could not readily identify a man with that name in my cousin’s family line, but I didn’t give up easily either.  I knew a woman who was collecting Mansfield family  information from all over the United States and beyond. I consulted her immediately and she gave me access to her huge  data base. We also started scouring newspapers from the time near her birth.

Albany turned to the others who were helping her as well. They gave her many hints, a sense of direction, and kept helping her narrow her search. This is one of many things she wrote in her journal: “I had matched on Ancestry with a 2nd cousin. Sharing this with one of the people who helped me with my DNA search, I saw that Jennifer Smith might be my great grandmother. I mentioned this to a friend, who quickly wrote me sharing an old obituary of Mrs. Jennifer Smith Johnson wife of Chester Johnson, stating that Mrs Cynthia Mansfield  was her daughter. I later found that Cynthia Johnson Mansfield  was married to Bob Mansfield, they would be my grandparents! . Ancestry census records had their sons as  Robert and William Mansfield. It looked like one of these men should be my biological father, but there was no hint of a Danny! Then I found an obituary for William Danforth Mansfield, and it had in quotes “Danny” as his nickname. Voila!” 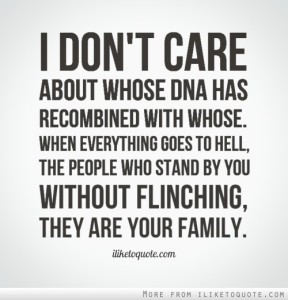 He fit! He had the right line going through the great-grandparents we’d identified as probably belonging to Albany. Next we found his obituary, which was sad, but had a surprise gift. Albany had a brother, a half brother named William, called Bill,  who lived out of state.  Albany wrapped her courage around herself, and called him on the telephone!  Bill was also surprised,  but could not have been kinder or more receptive! He offered to take a dna test, and within a month, they knew it was true, he and Albany were sister and brother! Since then, they’ve talked almost everyday.  Learning about each other what most of us grow up knowing, all the ins and outs!  They’ve become friends on facebook, and the wonderful thing is that they have included me in that friendship! Albany and I have become very good friends who enjoy many things in common like genealogy and gardening. That circle of “family” grows, and our hearts grow along with it! Albany  can love her new half brother and still love her sister, mother, and the father who lovingly raised her.

I’d love to hear about your own adventures with meeting new family members through your dna or genealogical work. I have written about some of my own before, including the post just before this one on dna. Meanwhile, I hope things are going well for you, and am wishing you all the best, Helen

6 thoughts on “DNA for Genealogical Research Can Turn You Upside Down and Inside Out!”