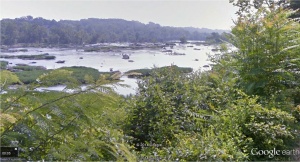 I was born and reared in Richmond, Virginia. My Mom’s family lived in Virginia since the beginning of our country, literally, in Jamestown! I think I’ve identified at least twenty ancestors who were present in Jamestown. Through my genealogical work, I even discovered that one of my great-great grandfathers designed and helped build the Capital building of Colonial Williamsburg, and the Governors’s Palace! Fast forward to the 1950’s and ’60’s in Richmond, with my Mom working in downtown Richmond, I was often left at the capital building of Virginia to tour and wait for her to finish work. Sometimes I was left at the State library, or one of the many museums! Mom was sneaky that way…absorb a little history and education while you cool your heels! LOL One thing I absorbed, was the beauty of downtown Richmond–the old churches and all the public buildings, it is just lovely. When we went up this week to see some of the Historic Garden Week homes and gardens, seeing the city through the eyes of my friend, brought the pride back of growing up in Richmond, with its Monument Avenue, fan district, Museum of Fine Arts, and the Capital of the Commonwealth of Virginia.  Everywhere I looked there were stories, family stories, historic stories, and personal stories. Parades, celebrations, the department stores with their grand windows, all that came flooding back!

We drove in from Midlothian and over the Huguenot Bridge into the city, just as my family did many, many days from our home on the South side of the bridge, to visit my Mom at her office on Cary Street when we were young, later downtown at 10th Street and Main Street, in the financial district.  Crossing the James River on the Huguenot Bridge brings you right up the hill past the lovely Country Club of Virginia where my sister had her wedding reception, and across from the stately old homes . 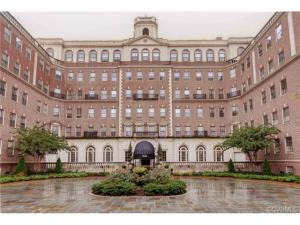 Tuckahoe Apartment Building where doctor who saved Helen’s life as a child, lived. 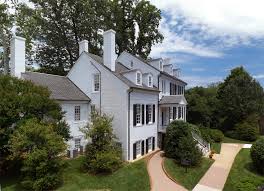 On the way to the lovely Virginia Museum of Art in downtown Richmond, we toured our friend from North Carolina around town. First step a drive down Monument Avenue with the accompanying stories of the statues facing north and south and their meaning. We had to drive her through Capital Square to show off our beautiful State Capital building designed by Thomas Jefferson. Then of course, the Jefferson Hotel itself with its grand staircase! We passed through the campus of Virginia Commonwealth University and the Medical College of Virginia, admired the architecture of small and large city houses, and admired the numerous old churches of all faiths. 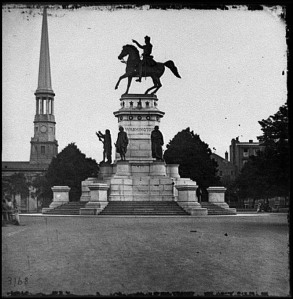 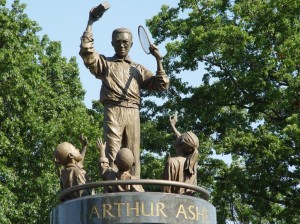 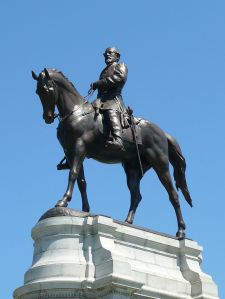 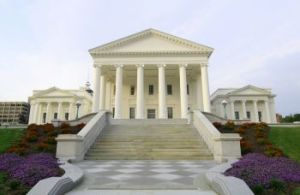 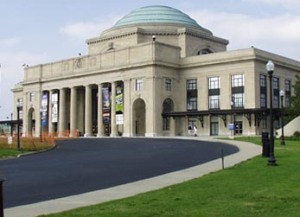 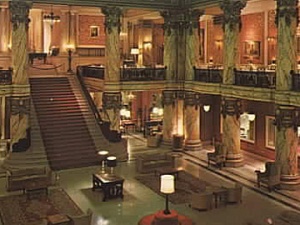 The Grand Staircase and lobby at the Jefferson Hotel in Richmond, Virginia, from richmondthenandnow.com

St. Paul’s Episcopal, The church building was completed 1845. It was in this church that President Jefferson Davis received word from General R. E. Lee that Richmond had to be evacuated, from, nps.gov

Regarding the Virginia State Capital building: ”

Thomas Jefferson sent from France a plaster model he had prepared in collaboration with the French architect, Charles Louis Clarisseau, as a modified design of the Maison Carre, late Roman temple at Nimes. The capitol antedated by more than 20 years the Madeleine in Paris, first example in Europe of similar quasi-literal temple architecture.

The cornerstone was laid in 1785 but the capitol was not completed in time to house the ratification convention in June, 1788, although the general assembly met in the unfinished building in October. The original portion was finished in 1792 under the supervision of Samuel Dobie and the brick was covered with stucco in 1798.

The wings and the long flight of steps were built in 1904-05.Virginia State Capitol. “

6 thoughts on ““V” — Virginia is for Lovers–Lovers of Mountains, Beaches, History, Gardens, and Family!”