Pablo, Tyrone, Uniqua, Tasha and Austin are five colorful animal pals with big imaginations. They team up to journey to imaginary places in their backyard. The TV show, and Uniqua especially,  is one of my 3 year-old granddaughter Katy’s favorite things to watch on TV! Today,  Uniqua and her friends have come to visit Katy, her brother Liam, and her sister Evie to play in their backyard with them! 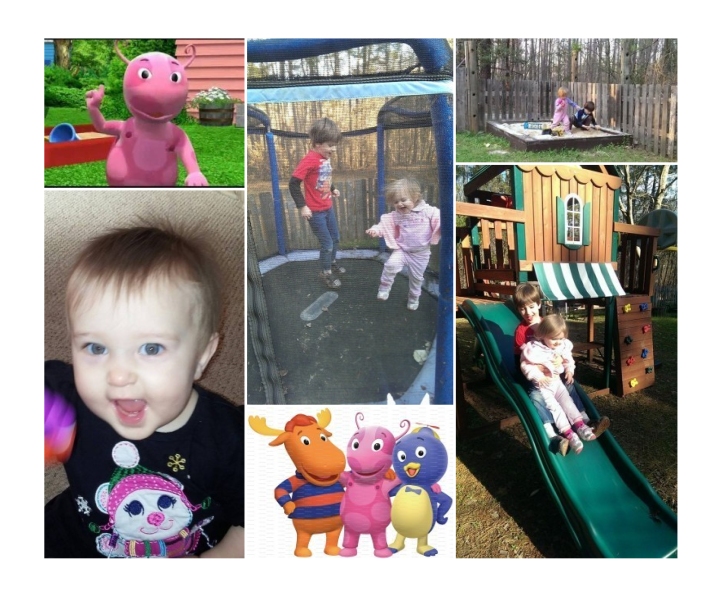 Let’s pretend we are sailing on Falls Lake down there where your Dad is a State Park Ranger, here in North Carolina!  We’ll build a boat out of these cardboard boxes. Liam will be the Captain, and Uniqua will be his first mate! Katy, Evie, Pablo, and Tyrone will be sailors!

“Aye Captain Liam, tell us how to begin.”  Liam had everyone dragging boxes and tape over into the middle of the yard. Cool, they go together like this, now all aboard! We’re going treasure hunting! 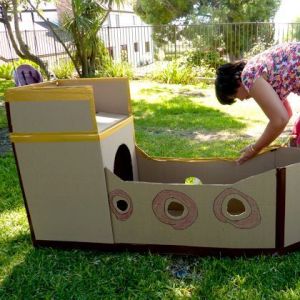 They donned their sailor caps, climbed into the boxes, and set sail for an island out in the middle of Falls Lake! Once there, after noticing the fish in the lake who swam with them, they climbed ashore treasure hunting island! “Look” shouted Captain Liam, over there near Katy and Uniqua, see the shine near your foot? Let’s dig there and see what that is! ”

“Yea” they all cheered!” Their colorful pails soon began to fill with the shovels of sand from the island sandbox!  Within seconds, they had found gold coins! Gold coins, right here in our sandbox, as Evie dug up another one buried over in her corner, than Pablo had one, Liam, Katy and Uniqua, even Tyrone! We came to the right place all right!

“It’s time to sail home and show Mom our treasure, and maybe get some milk and cookies”, said Captain Liam. Again, his sailors cheered! They climbed back into their boat, picked up their oars, and away they sailed–across the lake to the deck/dock! Tieing up the boat so that it wouldn’t float away, they climbed the stairs, hot and thirsty from their trip, so relieved to be met by Mom with a plate full of cookies and a pitcher of cold milk!  The sailors  could hardly wait to show Mom and Ranger Greg Dad their treasure! What an adventure!

According to Wikipedia, “The Backyardigans is a Canadian CGI-animated musical TV series that premiered in 2004 and was created by Janice Burgess. It features five animal children, who imagine that their backyard becomes an adventure place. It is a co-production of Treehouse TV, and the Canadian animation studio Nelvana. Debuting on October 11, 2004, it was originally directed by Robert Scull. Dave Palmer began directing the show in the middle of season one, and directed all subsequent episodes. It aired on CBSfrom October 2004 until September 2006. The songs for the show are music by Evan Lurie, of The Lounge Lizards, and Douglas Wieselman and lyrics by McPaul Smith. The characters were designed by children’s author and illustrator Dan Yaccarino. The series finale aired on May 31, 2010, and reruns continued to air on the Nickelodeon base network until mid-2013, when the series was pulled from the lineup. It has not aired in English regularly in the US since then (though was aired in reruns four times in December 2014), yet continues to air weekly (as the Spanish dub) on Univision. In March 2015, the series returned to Nick Jr. after more than 2 years.  The show airs on Treehouse TV Canada under Nickelodeon.”

One thought on ““U” — Uniqua and the Backyardigans visit Katy, Liam, and Evie”