Easter was a big holiday for our grandchildren this year. It didn’t look like that was going to happen the week before however.  One of their grandparents became very ill and had to be hospitalized. Thank heavens he recovered  Even the kids were sick the week before, viruses sent their fevers to 103 degrees, you can tell in little Evie’s eyes above that she wasn’t feeling well even though she was enjoying her big pink ears and furry bunny!  The bigger kids were sick also, but an Easter delivery made them suddenly much better! Thank heavens they were well by the weekend and could enjoy the awesome scavenger hunt prepared by their loving Aunt Annie, as well as the Easter egg hunt and games in the neighborhood.

I think the scavenger hunt designed by their Aunt Annie, my daughter, was incredible, and I had nothing to do with its creation! I am writing a children’s book about it however.  The hunt was fairly short and simple, befitting of the players who were ages 7, 3, and 15 months.  Part of what I thought was so amazing was that Annie  not only planned a hunt to involve all three children, each at their own skill level, but made it so that they had to take turns, help each other, and all be involved–a herculean feat for that age in my opinion! The goal of the scavenger hunt was to find Easter baskets made for the grandchildren by their Aunt and Grandparents.

Liam 7, Katy 3, and Evie 15 months were so excited!  Aunt Annie told them they would find a big surprise if they followed the clues of this scavenger hunt!  They had to follow exactly, to find the treasure! Aunt Annie gave everyone else in the room a colored plastic egg to hold, all different colors. She put pieces of colored paper down on the floor, each matching an egg. Then …

“Happy Easter everybody! We’re having a scavenger hunt so that Liam, Katy, and Evie (the only children present) can find a treasure!

Aunt Annie then announced:  “OK Evie!  Now Katy and Liam, you have to get the matching colored egg from one of the other family members in the room! What color egg matches this paper? Their silly Granddaddy yelled out “Blue”! But the kids didn’t fall for it! “Purple” yelled Katy, and she and Liam both ran to their Grandmother whom they called GiGi, to get the purple egg! Liam got there first and opened the purple egg, inside was a clue for Katy! (all the eggs held identical clues so it didn’t matter what color Evie chose, that was just her task.)

Annie had planned for the next clue to involve Katy, youngest to oldest! Liam read the clue to Katy, and was so excited, he could hardly keep from giving her the answer!  The clue read:  “Next to a popsicle, which is really quite silly, Is your next clue, in a place dark and chilly.”

You could see Katy thinking, then she took off running to the kitchen, where the freezer is on the bottom half of the refrigerator, and she had helped get popsicles from before! She was thrilled to find another egg, with another clue!  This time she opened it, but her brother Liam read the clue–which was for him!

Oh my gracious, this clue was tricky, and had two different problems to solve to find the next clue! On the piece of paper Liam held in his hand, was a picture of some bunnies hiding in the grass, and you could only see their ears! The clue read: “Look at the bunnies trying to hide! Count their ears to see how many bunnies there are. (There were six bunny ears, so there were only three bunnies! Liam figured it out!)  Now count back to the car of the train that matches the number of bunnies, and you will find a clue!”  Liam rushed over to the train, “Oh, I know, I know…one, two , three…YES!” There was another brightly colored plastic egg with another clue! 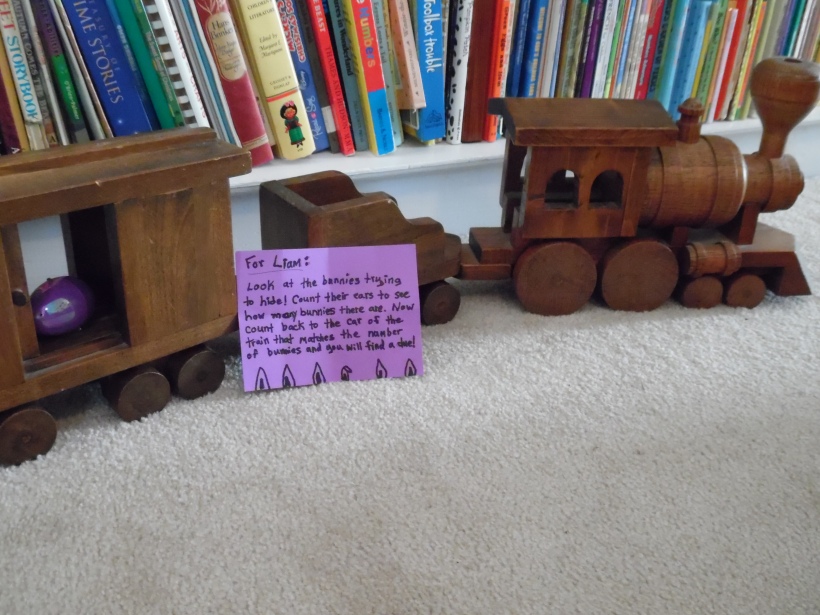 This clue was for Katy! Inside the egg were four pieces of paper, each had a letter and part of a picture. The clue read, “Spell your name with these letters to see what to find with your next clue.” Aunt Annie asked Katy, “What’s that letter Katy? and that one? Yes! Can you spell your name with them?” Katy knew just what to do, and put KATY together very quickly!  The pieces of paper came together as Katy spelled her name, to reveal the picture of a toy school bus. Liam got so excited when he recognized the toy, and he and Katy both rushed back to the toy shelf at the end of the hall! Sitting on top of the “Little People” school bus was another egg with another exciting clue! 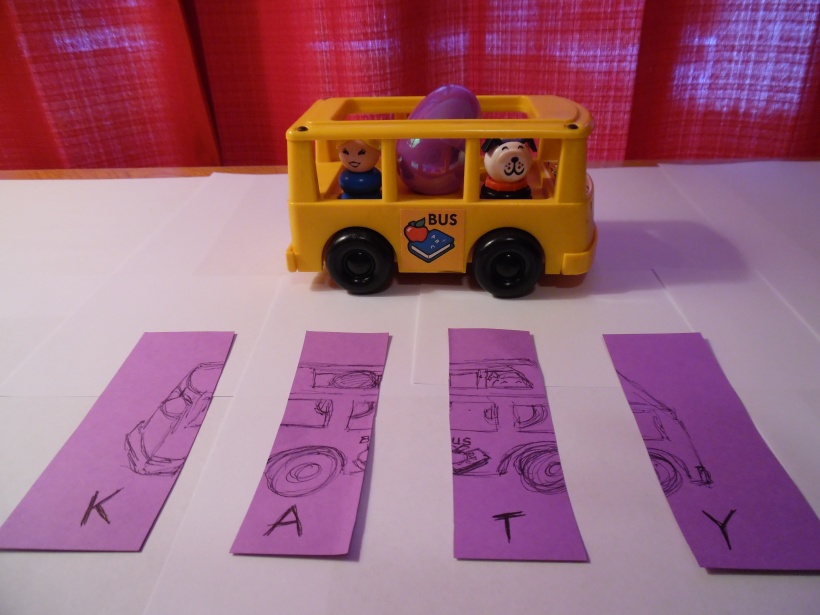 “For Liam” this clue said. “Something white like you sit on all day. Sometimes you may even lay,  I’m where you watch TV, your next clue is behind me!” Liam thought and thought, and looked around the room, very unsure. He slowly pointed towards the white sofa with a questioning look on his face. Aunt Annie said, “If you think that might be it, go take a look behind it.” Liam rushed right over and looked between the couch and the wall–surely enough, he pulled up a plastic bag of Easter eggs with a clue taped to the bag.

The clue read: “You’re almost there!  Now you BOTH have to help! Katy find four yellow eggs and open them up.”  Katy dumped all the eggs out onto the floor, selecting the four yellow eggs right away!  The kids opened the eggs and found pieces of paper inside with a single word on each piece.   “Now Liam…arrange the words to make a sentence you can read.”  Liam worked to put the words in a sentence that made sense to him.  He soon had the sentence “GiGi” “hangs” “clothes”  “here” spelled out in front of him.

In  response to their perplexed looks, their Mom said, “Think about it, where does GiGi hang up her clothes?” Liam said, “Oh I know!” and took off running with Katy right behind! They went into their grandparents’ bedroom and looked around.  First, Liam went to his Granddaddy’s closet, there were none of GiGi’s clothes there!  Then Katy looked into the matching storage closet right beside it, but they could see no treasure there, or any of GiGi’s clothes.  Hmm…again, they looked around the room, finally noticing the door to the walk-in closet! They seemed to rush towards it at the same time! When they opened the door, there were three baskets of gifts for the kids!  “Ah cool!” you could hear Liam say, as he discovered a flying dragon made by Granddaddy in his basket! Katy ran from the room, carrying her basket to show Mom and Dad–pink dinosaur in tow! By now little Evie had joined the excitement, tossing Easter grass everywhere! and immediately putting the dinosaur made just for her by Granddaddy, into her mouth! 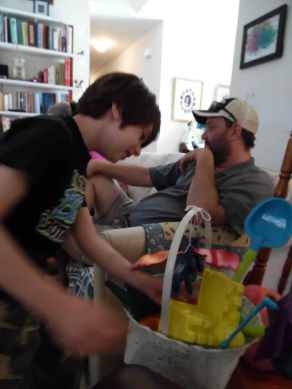 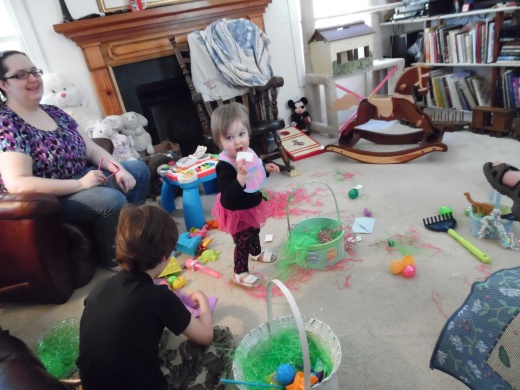 What a wonderful day, the whole family seemed to bask in the children’s excitement!