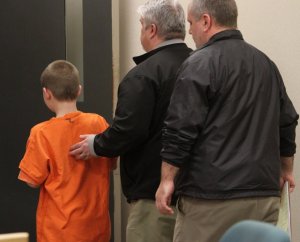 After college, for seven years before graduate school, I was a teacher of  children and adolescents with emotional and behavioral disorders.  So it stood to reason that my first job offer right out of grad school with my Master’s in Clinical Psychology, was in a juvenile treatment facility.   I was the “Staff Psychologist” (masters, not PhD), and there were 8 to 10 kids for whom I was regularly responsible. There were, all together, about 50 adolescents, ages 12-18 in the building.  Most were “Juvenile Offenders”, meaning they had been picked up by the police for shoplifting, fighting, or breaking other laws and were mainly with us awaiting their first day in court. In those days, the 1980’s, there were some kids who’d been apprehended for running away. The police picked kids up for that back then, not today.  These kids were only with us two or three days usually, and I only worked with them if they were suicidal.

I was hired to work with kids who had been proven violent and aggressive by the courts and mental health agencies, and were therefore locked away from general society, called treatment, not jail.

I was actually quite excited to have this  job opportunity. Coming right out of school with training in behavior modification, and realizing there was a caring, committed, and well-trained staff already in place, I truly, with all the enthusiasm and naivety of youth, believed we could turn these kids and their lives around–inside out– and send them on the “right” path through life.

We controlled their every move. Child care workers (guards) told them when to dress, eat, and sleep. They slept in individual locked cells. The doors along the hall were locked every ten feet or so, leading to other areas of the small building. I had to learn to buy and wear clothes with pockets in them, so I could carry my keys with me at all times. The kids went to school in this small, squat brick building as well– in fact lived there–sometimes for years. They played outdoors where there was a basketball hoop surrounded by a high barbed-wire fence, and they had therapy.  If they behaved and followed the rules, they could earn privileges including going out of the facility, to see a movie, to shop, or maybe even to see family. Staff was generally kind to them, there were long talks with lots of people–even the cooks and teachers, the director, all were involved.

If a kid had a temper tantrum, “broke bad” , child care staff would go silent. They would surround the child, and take him or her to the floor gently by sweeping them up by their feet, while others held their shoulders.  Then they picked the kid up with about six of them carrying him. They would take them to a “cooling off” room, and put them on a bed where they were put in five point restraints until they were calm. If the kid was a head banger, or tried to bite the staff, they had a helmet put on their head, and a mouth guard put in their mouth. The psychologist, social worker or head child care staff were the only ones who were  supposed to talk during this time, to see if the child was okay, if they wanted to cooperate, if they were ready to talk– instead of course, to threaten, kick, hit, spit, bite, or whatever.

When I started working at this facility, my oldest daughter was 12. She had a favorite pair of black jeans she wore, with a pink lining which had little black polka dots. My very first day on the job, I walked in–and my first sight was to see the staff having to take down a kicking, screaming, biting young girl, who was only 12 herself! As I watched them helmet her, I realized she had on those same black jeans with the pink polka-dotted lining, that I’d just left at home on my own child! I had to leave the room as tears flooded my eyes!

Individual and group therapy, and designing behavioral modification structures,  was mostly what I did at the center. We were teaching the kids to talk about things instead of acting them out…in babysteps. So we had group sessions often.  We role played behaviors, we talked about families, we talked about growing up in a facility, getting out, how to cope, so forth and so on. Sometimes it went very well– sometimes not so good!

I remember very clearly one time when we were meeting for group therapy– I was sitting on a couch with one other teen, and the other eight kids were seated in a circle. The very same young girl I’d seen restrained my first day at work, was sitting across from me now, almost 2 years later. She was getting angrier as the group discussed an earlier altercation on the playground. It had cost a lot of them privileges, and even though painful, we were trying to learn what principles had been taught by it. Sally (fictitious name) was getting angry and I could tell. I was getting ready to ask her if she needed to take a timeout, or to take some deep breaths.  Before I could blink however, she attacked me! She leaped out of her chair and it seemed like she was flying across the room! Then she jumped on me– grabbed me around the neck, and took me over the back of the sofa onto the floor! Before I could get a breath, six childcare staff, summoned by the one who’d been in the room, surrounded her and took her off of me and once again put her in restraints. Her lack of impulse control, was greater than her loathing/fear of going back into the restraints.

I wish I could tell you that we did indeed “turn these kids lives around”.  Unfortunately, I saw many  transfer out at age 18, only to be arrested a few weeks or months later for hurting someone! Then they went to jail. I became very disenchanted, and more cynical. I became a believer in the “missing gene” theories of crime, it surely seemed  like something was missing for these kids, with such highly invested treatment, not to be able or willing to change their behavior. Some seemed to literally have no conscience, to be budding psychopaths and sociopaths.

One Friday night, about 10pm, when I was at the Juvenile Center because one of the “regular juveniles”  had threatened suicide, I talked on the phone with my husband.  He was home alone with our two children, ages 7 and 15, and his wheelchair-bound father, who had moved in with us after his mother had died. I found myself asking , “How are the kids there, honey? Did they get to bed easily?”  In turn, he asked, “How are the kids there doing?” WHOP! That conversation hit me upside the head, and got my attention!  I was suposed to be at home, helping him raise our own kids.  Yes, I felt a great responsibility and caring for the kids at the Juvenile Center, but actually, they were beginning to get more of me than my own family! That was a turning point, and it wasn’t long before I had moved to outpatient counseling of adults, families, and groups in a center owned by a private psychiatric hospital.  As the director of the small counseling center, I also got to teach seminars all over the community, in schools, churches, and businesses–I was a teacher at heart and loved it.  A whole new chapter of my life..one full of new experiences and joys had opened–and although I was sad to leave the Juvenile Center behind, I was thrilled to move on as well.