Louisa Voelkler, b. 1836 in The Kingdom of Saxony, wife of Gustavus A. Voelkler

Helen Marie Voelkler, b. 1849 in the Kingdom of Saxony, daughter of Gustavus and Louisa Voelkler, married Robert F. Hogue

“Gustavus”, “Gu-sta’-vus!”, I wish you could hear me say this, because I think of his name as being said with a guttural German accent, with a deep baritone voice, and a great deal of dignity! Why I think of him this way I do not know, because I never met the man, but I heard about him, and I know he was highly respected in the family! Gustavus Ang Voelkler was born in 1834 in the Kingdom of Saxony, whose King John he swore allegiance to, before he came to America in 1864. I am not sure where in Saxony he was born, nor have I been able to identify his parents! He arrived in America in 1864 and settled in Williamsport, Pennsylvania, along with his wife Louisa Voelkler, b. 1836 in Saxony, and two of his seven children. His oldest child and daughter, Helen Marie Voelkler, 1849- 1914, became my great-grandmother, and her portrait, seen above, hung in the dining room of my parent’s house, all of my life! She married Robert Fulton Hogue, b. 1850, of the Hogue family from Scotland, a family I have written about often. His son Ludwig, born in Saxony in 1861, grew up to be a dentist in Pennsylvania! They all overcame the culture shock of moving to America, leaving behind the German language and daily life there, and melding, indeed thriving here in America. The other children, born in America, were: John F. Voelkler, 1866;  Louisa, called Lizzie S. Voelkler, 1868;  Ernest J. Voelkler, 1870;  Max Gustavus Voelkler, 1872, ; and Julia Voelkler, 1876. I have pictures of Gustavus’s wife Louisa, his daughter Helen Marie, and his daughter Lizzie. Unfortunately, I do not have a picture of Gustavus, I wonder if we can tell what he might look like from his descendants’ portraits?

I say thriving because that is what they obviously did! Gustavus was an extremely talented musician, a pianist and vocalist, among other things. He arrived in the States in 1864, and by 1870 can be found teaching music at the Dickinson Seminary in Williamsport, Pennsylvania!  The short obituary I found says that he served as the principal of the music department at Dickinson, so obviously his talent and managerial abilities were  recognized! There is a book titled History of Lycoming College and Its Predecessor Institutions–Williamsport Academy, Dickinson Seminary, Williamsport Dickinson Junior College, by Charles Scott Williams.  You can read it online and even download it at this link: https://archive.org/details/historyoflycomin00will .  Gustavus Voelkler is listed in this book as being part of the Music Faculty starting in 1870 as far as I could trace. 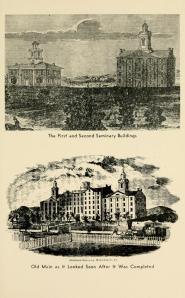 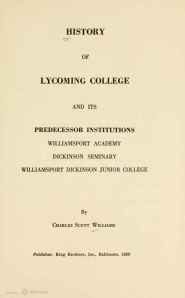 As it turns out, his daughter Louisa, called Lizzie, became a music teacher at the seminary herself when she was an adult! She obviously followed in her father’s footsteps! I have also found listings in the City Directory that show that Lizzie and Gustavus taught students in their homes. Just two weeks ago, I wrote a post about Marie Kerse Maher, another talented musician and teacher. She was on my mother’s side, and the Voelklers are on my father’s side, so no wonder my brother and sister and my daughters are talented musicians vocally and instrumentally! Actually, we have many musicians in the family, I will list posts about them below. Too bad those musical genes skipped some of us! LOL

On Tuesday afternoon, July 19, 1893, according to the article seen below,  from the Wilkes-Barre Times in Wilkes-Barre, Pennsylvania, Issue 1087, Page 5,  we see that Gustavus Voelkler won first prize  in a concert , a Saengerfest, or Songfest.  He performed the piece “Waldeinsamkeit” which means Forest Solitude which is a poem written by Ralph Waldo Emerson and put to music. I have included the words by Emerson, and a recording from youtube.com of  Helene Lindqvis and Philipp Vogler singing! Vogler/Voelkler, could they be kin, I will have to investigate!

I do not count the hours I spend
In wandering by the sea;
The forest is my loyal friend,
Like God it useth me.

In plains that room for shadows make
Of skirting hills to lie,
Bound in by streams which give and take
Their colors from the sky;

Or on the mountain-crest sublime,
Or down the oaken glade,
O what have I to do with time?
For this the day was made.

Sheen will tarnish, honey cloy,
And merry is only a mask of sad,
But, sober on a fund of joy,
The woods at heart are glad.

There the great Planter plants
Of fruitful worlds the grain,
And with a million spells enchants
The souls that walk in pain.

Still on the seeds of all he made
The rose of beauty burns;
Through times that wear and forms that fade,
Immortal youth returns.

The black ducks mounting from the lake,
The pigeon in the pines,
The bittern’s boom, a desert make
Which no false art refines.

Down in yon watery nook,
Where bearded mists divide,
The gray old gods whom Chaos knew,
The sires of Nature, hide.

Aloft, in secret veins of air,
Blows the sweet breath of song,
O, few to scale those uplands dare,
Though they to all belong!

See thou bring not to field or stone
The fancies found in books;
Leave authors’ eyes, and fetch your own,
To brave the landscape’s looks.

Oblivion here thy wisdom is,
Thy thrift, the sleep of cares;
For a proud idleness like this
Crowns all thy mean affairs.

You can hear this read aloud at  http://www.repeatafterus.com/title.php?i=1342&p=t

Newspaper article re. Songfest of  1893 where Gustavus A. Voelkler won first prize!  See source in body of post.

Not only was Gustavus Voelkler a talented musician, but I believe he must have cared a great deal for his family, because I have learned that his family did, his children. I have been told that his son Max  was a favorite uncle of my uncle Fulton, son of Helen Blanche Youngblood, grandsonof Helen Marie Voelkler and  and Robert F. Hogue. In fact, I  understand that my great-uncle R.Clay Hogue visited them often while growing up. Later, in his young adulthood, when Clay decided to attend medical school,  the other Voelkler children got together and paid his way to medical school! What a sacrifice that was, what an incredible way to show your love and committment to family! All the evidence I can find indicates that Gustavus Ang Voelkler was a good  man, a talented man, and an ancestor one can claim with pride.

Your 2nd great grandfather,   Birth May 1834 in Sachsen,Kingdom of Saxony

Other posts about ancestors or descendants with great musical talent:

2.  “On the Tweflth Day of Christmas my True Love Gave to Me, Twelve Drummers Drumming…”

3.  “On the Ninth Day of Christmas My True Love Gave to me…nine ladies dancing…”

One thought on “Gustavus Ang Voelkler, Another Stellar Musician, 52 Ancestors in 52 Weeks, #41”