Mary Josephine Spangler lived from the 14th of September, 1887- until the 7th of March, 1970. I would have been 21 the week after she died. Plenty old enough to have taken the chance to know her and some of my first cousins, 2x removed who lived in the mountains of Virginia, while I lived in Richmond, Va. –but I did not know of them! How sad! These were the children of my great grandmother’s children! She had died in 1900, they came along about 1882- 1892,  my grandmother’s first cousins. My grandmother, who knew them, died before I was born in 1949. Home from the war, four children and a mother to care for, my Dad was busy keeping up with his own 3 sibling’s families and my Mom worked full time (unusual for women of the 1950’s) and was busy keeping up with her five sisters and all of our cousins there! We had a full life, so we didn’t realize what we were missing! Fast forward 65 years, and here we have our first joint family reunion, with two families of my great-grandmother, descendants of two sisters: Fannie and Evelyn Langhorne. How exciting! We discovered a lot to love about each other, a lot we had in common, and some differences. We left the reunion, wanting more!

Fannie and Evelyn were two of nine children of James Steptoe Langhorne and Elizabeth Rachel Omohundro. Evelyn married Walter Thomas Houchins and had nine children of her own, with three dying in childbirth or early childhood. Fannie married Wallace Wolford Spangler and had six children with him. There were lots of cousins in our huge family!

With stars in the family like the Spangler musicians– John Watts Spangler called “Babe” and dubbed the “Old Virginia Fiddler”; Dudley Spangler, also a recording star fiddler called “Babe”; Charles Langhorne, Tump, a fiddler and a state legislator—it’s easy to see, why a quieter, female, sister, Mary Josephine Spangler, who was a poet, might get little attention! After all, she was busy raising four children of her own, while her well-known husband Dudley played and sang for the masses! At our Langhorne family reunion, I had the absolute joy to see and get to know three of her children!  They are Margie Spangler Cartwright-92, William Wallace Spangler, 91, and Bernice Spangler Irvin, 84. They are all full of enthusiasm, knowledge, and generosity! They brought recordings of their Dad and Uncle Babe singing and playing for us to hear, which was wonderful! But they brought a special treat as well. They brought poetry with them, poetry that their mother had written and poetry that Margie had written and made into a song! I hope to share that with you in another post.

This is a poem by their mother, Mary Josephine. It is called simply, “Mayberry Virginia”. There is a true community nearby called Mayberry, where life was very simple in the early days. It is in fact, where Andy Griffith first visited and got his idea for the name Mayberry for the small town of his television show.  In this way, and in others, this poem is a marker of history, and shows that Mary Josephine was paying close attention to current events when she wrote it in the 1930’s. You see, the poem is also about the coming of the Blue Ridge Parkway to that area of Virginia. President Roosevelt and Congress approved the building of the Parkway in Virginia and North Carolina to provide a scenic trail for sure, but also to put hundreds, even thousands to work as the country was recovering from the depression. Work in Virginia started in 1936. The very end of the poem refers to an electric dam, and to Danville. One of our Langhorne cousins, Lucy Lea Rudd, shared with me that the Dams her Aunt Josie was speaking of are on the Dan River and were built in the 1930’s. They are in a canyon that runs from Vesta, south of Meadows of Dan, and Mayberry. Lucy said  that her father worked on them, which is why she knew they were built in the ’30’s.  How’s that for a bit of eye- witness history! Thank you Lucy Rudd! T he dams are owned by the city of Danville according to Lucy, and people have to have permission to go down to them. Mary Josephine knew all of this, and put it in  a poem! Well done my cousin!

by Mary Josephine Spangler, in the second part of the 1930’s, 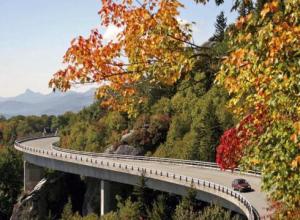 With roads of every kind,

And some ore the mountains wind.

Room for every soul,

We will not have to push or pull, 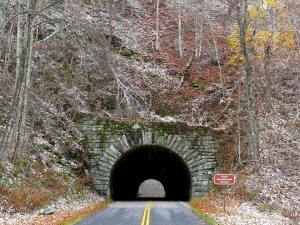 Our cattle will soon by traveling,

Thru tunnels under ground.

The old jersey cow with the bell on,

Won’t even make a sound.

Crossroads will be bridged,

Up toward the sky so far,

That when the planes fly over,

They’ll wonder what they are.

Then when our children start to school,

None at the crossroads,

Will be found hurt or dead.

But there will be no new ones then.

We all will live, I am quite sure,

This road will take you to the mill,

That’s just around the bend.

Where buckwheat, corn, and wheat are ground,

Which ere you choose to send.

And when the northern tourists come,

That is seeking to get fatter,

We’ll stuff them up on buckwheat cakes,

And let them drink some batter.

From mountain, hill, or lowland,

So when Miami tourists drink,

The Appalachian Trail comes by,

From Maine, to way down South,

But these tourists rarely stop to drink, no matter rain or drought.

Five miles, it is no sham.

And build an electric dam.

4 thoughts on “Spangler, Mary Josephine-Poet in the Shadows of Her Famous Husband and Brothers—52 Ancestors in 52 weeks, #32”