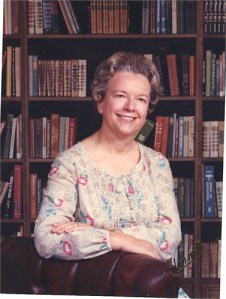 Did you ever have a favorite aunt? You knew you couldn’t say that out loud because you might hurt someone else’s feelings, but yes, Janey Bell was my favorite aunt, one I idolized from a young age. 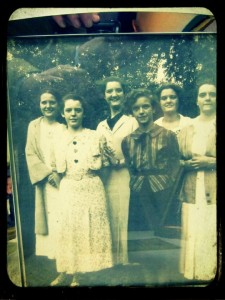 Janey Bell was the youngest of seven children, six girls and one boy. Her brother died when he was  young, and as my mother’s sister, we grew up under the influence of these incredible women. I’m sure being the baby of seven is one reason she had a very playful, joyful spirit, as the youngest child in any family often does. It turned out that she never had children of her own, but had 12 nieces and nephews all of whom she adored. We adored her right back. Janey Bell had a gift for making you feel special. First of all, she would listen to us even when we were tiny children.  She always made you think that you were important when most adults didn’t seem to care.

Janey Bell was also quite brilliant. Born in 1923 in Richmond Virginia, she graduated from Radford University in the mountains of Virginia. While at Radford, she received the John B. Spiers award for the highest grade average. She went on to earn her Master of Arts in Education from Wake Forest University in Winston-Salem, North Carolina. Just think, when World War II was going on, this young woman was already married, her husband was off at war, and she was breaking records at the University. Like her mother Katherine Steptoe Houchins Kerse, and her Aunt Julia Elizabeth  Nichols, who were professional women in the early 1900s, Janey Bell became a teacher in 1952, when most women were encouraged to be housewives. Janey Bell was not just any teacher either. She taught children with learning disabilities and with emotional handicaps. She did this for 37 years. Towards the end of her career, Janey Bell served as the supervisor for Special Education in the Forsyth County Schools of North Carolina. She had been recognized as the Teacher of the Year in 1980-81 for Forsyth County, and was one of the top three finalists for the State of North Carolina. She was dedicated, creative, and committed  to her students and her profession. As a child growing up, I was inspired by this incredible woman. I remember clearly visiting her one particular summer of many, when she was teaching summer school. She was teaching in the building of the Bowman Gray Medical School, an old castle like mansion. One day she took me with her to her school to observe. As I watched Janey Bell interact with her students,  my own future career was born. I was only about 12 years old, but indeed I went to college, got a degree in psychology and special education, and taught emotionally disturbed children and teenagers myself. Later I earned a Master’s degree in clinical psychology and became a family therapist. Much of that career was modeled after my stellar aunt.

When Janey Bell was about 59 years old, she was diagnosed with mild Alzheimer’s. She had begun to forget things in the year or so prior to this. She began to miss meetings that she had scheduled. She would get lost driving home from work, a route she had taken for almost 40 years. I remember one Thanksgiving as the family gathered together for dinner, about 30 of us were together, including five of our six aunts. We said the blessing as was our family tradition. However about five minutes later as we began to go through the buffet line, Aunt Janie Bell said, “Stop! We can’t eat! We haven’t said the blessing yet!”  Murmuring our apologies and our wonderment at her memory loss all 30 of us bowed our heads and said another blessing. The move through the buffet line commenced again but within minutes our precious Aunt Janey Bell stopped us again, very upset that we had neglected to say the blessing. For the third time our whole group let the blessing be repeated. Our Mother’s was a very loving, supportive family. However when the fifth outcry came from Aunt Janey Bell to stop what we were doing and say another blessing, the oldest sister confronted her! She said. “Now Janey Bell, we already said the blessing. You need to let everyone enjoy their dinner. Come and sit with me.”  Janey Bell had us all repeating our names, the schools we went to, and our stories over and over again that day. We were all devastated.

It wasn’t long before Janey Bell lost the ability to speak except in garbled, unintelligible language. She went to live in a nursing home and used a wheelchair to wander the halls. One day when I went to visit, my husband and Uncle Roy her husband, were with me. At first I didn’t think she knew who I was, but as we began to talk together, it seemed like she knew me after all. She looked  right at me and gave a long  spiel of words, none of which I could understand. When she finished her obvious dissertation, instead of admitting that I could not understand her, I placated her by saying, “Yes, I understand.” She looked right at me, and with an expression of pure joy on her face, said as clear as day, “Good, then tell Roy!”  I was floored when she gestured that I should talk to my Uncle Roy right then. I panicked and made a sign of surrender with my hands in the air. Seeing this, my precious Aunt Janey Bell, turned her wheelchair away from us and paddled away with her feet. It broke my heart. We decided to leave, and when I approached her to say goodbye, there was no sign on her face that she had any idea who I was. She had already retreated into another world it seemed.

Aunt Janey Bell’s decline and death was painful to watch. However, when you look back at her lifetime, you see a huge trail of children including her students, her nieces and nephews, and me–who bloomed because of her loving, dedicated guidance. Here’s to you-Janey Bell Kerse Sommers, thank you for all the lives you touched, and I love you to infinity and beyond! Helen

You are the daughter of Margaret Steptoe Kerse

From the Langhorne family: