I remember when I first found “the Royals” in my family tree–in my direct line!  I was so excited! I knew my daughters and sister would be happy about it–after all, they grew up on Disney Princesses and now they were kin to real queens and kings! Then, just in the last week, I heard a friend talking about how much she liked Philippa Gregory’s books about Elizabeth Woodville, Margaret Beaufort, and Jacquetta de Luxembourg! Well, I recognized those names, so I sat up and paid attention. As it turns out, Philippa Gregory writes historical fiction, and several of her books have been turned into movies.  One of her series is about “The Cousins’ War–the war of the Roses in real life! A wonderfully succinct article in Wikipedia tells us about this series:

The chronological order of the books is

The Lady of the Rivers—I checked our family tree, and sure enough, Jacquetta de Luxembourg, Duchess of Bedford, is my 17th great-grandmother! This descendancy chart shows the relationship for me and all my Langhorne cousins of my generation. 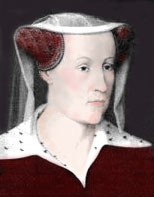 is your 17th great-grandmother

You are the daughter of Margaret Steptoe Kerse 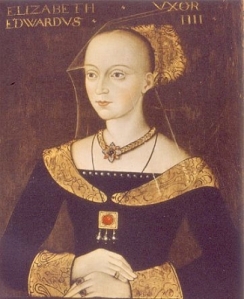 —The White Queen–Jacquetta’s daughter Elizabeth Woodville, (1437-1492) became the Queen of England when she married King Edward IV of the Plantagenets. In Philippa Gregory’s work, Elizabeth is portrayed as the White Queen.   In real life, she was my 17th Great Grand Aunt!  Her mother , Jacquetta , Duchess of Bedford, Luxembourg (1416-1472) being my 17th great grandmother.  I descend through Elizabeth’s sister, Jacquetta Wydeville, (1444-1479)who is my 16yh great grandmother.

Queen of England Elizabeth Woodville (1437 – 1492)-updated, March, 2017
is your 17th great grand aunt
Jacquetta “Duchess of Bedford” Luxembourg (1416 – 1472)
mother of Queen of England Elizabeth Woodville
Jacquetta Wydeville (1444-1479)
daughter of Jacquetta “Duchess of Bedford” Luxembourg
Joan Strange (1463 – 1514)
daughter of Jacquetta Wydville
Jane Stanley (1485 – 1557)
daughter of Joan Strange
Edmund Sheffield, 1st Baron Sheffield (1521 – 1549)
son of Jane Stanley
Eleanor Sheffield (1538 – 1595)
daughter of Edmund Sheffield, 1st Baron Sheffield
John 1st Earl of Clare, Holles (1564 – 1636)
son of Eleanor Sheffield
Robert Hollis (1590 – )
son of John 1st Earl of Clare, Holles
Susanna Hollis (1613 – 1681)
daughter of Robert Hollis
Maj. Robert Beverley Sr. (1641 – 1687)
son of Susanna Hollis
Mary Beverley (1678 – )
daughter of Maj. Robert Beverley Sr.
Mary Rice (1683-1798)
daughter of Mary Beverley
Col. Maurice Scarsbrooke Langhorne (1719 – 1791)
son of Mary Rice
Elizabeth Langhorne (1758 – 1818)
daughter of Col. Maurice Scarsbrooke Langhorne
Henry Scarsbrook Langhorne (1790 – 1854)
son of Elizabeth Langhorne
James Steptoe (blind) Langhorne (1822 – 1905)
son of Henry Scarsbrook Langhorne
Evaline (going blind when died young)) Langhorne (1866 – 1900)
daughter of James Steptoe (blind) Langhorne
Katherine Steptoe Houchins (1883 – 1943)
daughter of Evaline (going blind when died young)) Langhorne
Margaret Steptoe Kerse (1918 – 1980)
daughter of Katherine Steptoe Houchins
Helen Spear Youngblood
You are the daughter of Margaret Steptoe Kerse
As of this update of March, 2017, I am no longer  blood related to the Red Queen, Margaret Beaufort, 1443-1509.  She is somply one of the wives of my  16th great grandfather, Thomas Stanley, 1435-1504.  This change occured when we dropped the Welsh descendancy of our Langhornes.  However, the family “connection” still stands.
The White Princess is identified as  Queen of England, Elizabeth York Plantagenet, 1456-1503.  She is now  my first cousin  17 times removed.   She is the daughter of  the White Queen, Queen of Enland Elizabeth Woodville, and the granddaughter of the Lady of the Rivers,  Jacquetta of Luxembourg. How interesting to actually be part of this family1
However, as exciting as this is, and yes, I did buy the books, there are some major controversies about these descendancy charts which might render them historical fiction themselves! How sad would that be! First of all, John Perrott has been reported as an illegitimate son of King Henry VIII in a great deal of history. It is reported that even King Henry VIII recognized him as his son, educated him and provided for him. If that is true, then our descendancy is true, and our DNA would match, if we had some DNA from that line, I am looking into that. Recently, several authors have come along to say this is not true, but their ‘evidence’ seems all circumstantial to me.
It feels the same for another controversy that I just learned about this past week! For all these years, in most historical works, researchers have believed and accepted that Mary Beverley, b. 1678 in Jamestown, Virginia, married John Langhorne. However,  it is now believed that  Mary Beverley’s daughter, Mary Rice was the true wife of John Langhorne. There are four sons named William Beverly  Langhorne in this family line, why would that  be except to honor and carry on the Beverly name? I may be wrong but I have not been able to identify a single child or grandchild carrying the name Rice!  However, there is a court case–better explained by this article available at http://www.geni.com/people/Mary-Langhorne/6000000012953341622
“

3 thoughts on “Popular Books and my Royal Ancestors–Elizabeth Woodville,Queen of England, Jacquetta de Luxembourg, and Margaret Beaufort– 52 Ancestors in 52 weeks–16”