In the Fall of 2013, after several years of failing to identify the ancestral line of my Scottish Hogue family, I had my DNA done  through ancestry.com. The information  received from this DNA test didn’t break down my ‘brick wall” , but it did introduce me to a lot of Hogue cousins with family trees on ancestry.com,who like me, could not go back any further than our first ancestor to America! We decided to form a research group and chose facebook as our meeting place! What a delight to meet Hogues in my own direct line from all over the country and the world! One of the most fortunate things to happen with this association, was that one of the members had heard of this Scottish genealogist who might help us!  I looked him up immediately, and found Douglas Moncrieff, a professional genealogist who volunteered to help people solve puzzles and mysteries in their family trees! I wrote him a note, and he has been guiding us ever since! He was a gift from God, brought to us by the angels I tell you!

Douglas Moncrieff is a man any and all genealogists would like to know. His expertise in Scottish history and its people knows no bounds. However, not only is he smart, experienced, and educated in this field, he is kind, sensitive, and funny! He has a dry wit that sends me into peals of laughter occasionally–when I don’t miss it ! (being a naive American) On top of all that–he works tirelessly for us, for others, and at his many professional pursuits.

Let me tell  you a bit about Douglas. He is married to his beloved wife, Ann, and together they have two sons, John and Charles, and two grandsons. He remembers his wedding day, and the births of his sons and grandsons as being the most important events in his life!  Douglas came from a large family with three brothers and two sisters. His family originated from Perth, Scotland, which is the family seat, but Douglas was born in Edinburgh. Douglas as a teenager is on the right in the picture below with his family. 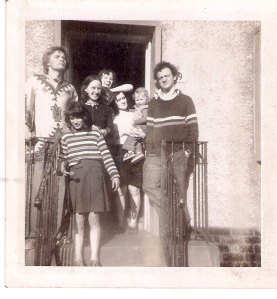 As Douglas grew into a  young man, it became evident that he had excellent tracking skills! Tracking of humans that is! He was a born detective. Over the years he worked for several different official agencies in the United Kingdom, where his job was to find and track people living anywhere in the world, normally people who did not want to be found! He was quite good at what he did however, which means  that those whom he was tracking were soon caught or identified! The wonderful thing is, not only did he do this professionally, he did this as a volunteer for elderly people who had lost track of their family–some who thought they had no living relatives. He didn’t want to hear of them dying alone. He remembers once “the moment I knocked on a total stranger’s door and told them they had living relatives they never knew about. A lady living in the States contacted me through Facebook, to search for any of her family that might still be living here.  I found them, and now they are in constant contact!”  What an amazing gift–the gift of family! 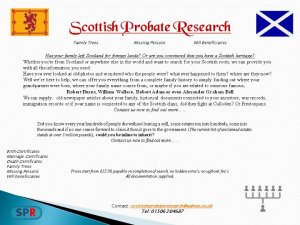 The first illustration above, Scottish Probate Research describes what Douglas does professionally other than his genealogy, but the second two show his sense of humor! I happen to love the television show “Suits”, and I was thrilled to see that Douglas had been hired to work for the firm! LOL   They would be so lucky to get him!

I want to tell you about Douglas’s illustrious family’s past. In fact, he is really Laird Moncrieff of Glencoe, following a long line of distinguished Moncrieffs! This wonderful newspaper article shows and tells us some about his own ancestry including “Sir Thomas Moncreiffe, who built the first Moncrieff House, was the clerk of the exchequer in Scotland before the Union of the Parliaments in 1707, and held high office until his death. The estate was passed down to the sixth baronet, Sir David Moncreiffe, a Regency playboy who had kennels and racing stables in the grounds of the stately mansion and who, it is said, married his wife after a successful bet. His son, Sir Thomas, had eight sons and eight daughters, one of whom was Florence Nightingale.”  Tracing back even further we find the Moncrieff name tracking back to King Duncan!

With all of Douglas’s vast knowledge of history and all of his adventures, when asked during our interview who from all history, he would have for dinner and why, this is what he answered:

“Believe it or not, having researched many people from history, delving in and out of their lives, from a distance and learning all I can about them, when I thought about this, there was only one choice, given that the opportunity to speak to someone from the past may only be a one-off, the two people I would like to have over for dinner would be my mum and dad. then I could say all the things to them I should’ve said when they were alive.  (missed opportunities)”

This is the softer, gentler side of Douglas Moncrief that I have come to admire. Can you imagine meeting up with the ferocious, skip tracking side of him in the dark?

I had learned that Douglas played the guitar, but when I asked him about it, and his musical tastes, I was surprised to learn just how experienced he was.

“My music tastes vary between classical and  rock depending on what sort of mood takes me. One minute I can be listening to Yo-Yo Ma (cellist) and the next I’ll be banging my head to status Quo! I also like Glen Miller, Frank Sinatra, The Beatles….anything really.  I have over 2000 tracks on tap.  I have played guitar for over 40 yrs. (that makes me sound really old), l’m sure you’ve seen all the photos on my page of the band and me when l had hair (see l am getting old), l also teach guitar sometimes to local kids. I remember  playing live for the first time in front of 5.000 people (that was a bit scary, but what a rush)!  I have just been invited to a reunion with some of the remaining members with a view to recording again, but that l will have to think about. I’m not sure l want to get back into being a sex symbol again…lol”

You have to love this man, if he weren’t a genealogist, he’d have to be a commedian! He is comfortable in his own skin, happy with his own life,and it shows. 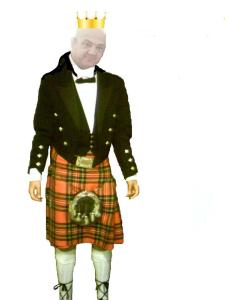 If  you need Douglas Moncrief’s help, you can contact him at douglas@scottishprobateresearch.co.uk

Laird Douglas Moncrief, we thank you for all you have done for our Hogue family, and for all you’ve done in your place in this world–you are surely a Superman in my eyes!

7 thoughts on “Douglas Moncrieff — Scottish Genealogist and Superhero to Many Around the World!”