My grandfather Thomas Philip Kerse, was a police officer in Richmond, Virginia as was his Dad before him–Sergeant James H. Kerse. I wrote about his Dad just a week ago which you can read here if you like. Thomas Philip Kerse was born in 1884 and died in 1939, at 55 years old. He started working for the police department in 1910 when he was 26. In 1911 he married my grandmother, Katherine Steptoe Houchins. Together they had seven children, one son and six daughters! Their only son, called Bucky,  drowned in the James River when he was only 8 years old.  You can read his story in this blog post if you’d like. The six girls were a moving force! They were a close-knit family and “the sisters” were the matriarchs of our collective families, and my mother Margaret Steptoe Kerse Youngblood was one of them! Unfortunately, they were no strangers to tragedy, as their mother, a nurse was shot in the head by a private duty patient she was attending–blogged about as well.

We were told that our grandfather drove a police car, but I never really thought about what a remarkable thing that was until I began researching and realized that automobiles weren’t often found in public in the United States  before 1907! Police departments generally still used horses and carriages. For him to be hired specifically to drive one of the first police cars for the Richmond City Police Department in 1910 in Virginia, now means a lot more ! I found several articles about his driving the “Paddy Wagon” or the “Black Maria”. Both of these were slang names for the police wagon used to pick up prisoners–especially those resisting arrest. I was so pleased to find these newspaper articles from the Richmond Times Dispatch on genealogybank.com, about his being hired, about a police parade review with him driving the “Black maria”, and about his shooting a rabid dog!

The story I like the most however, is the story about Grandpa Tom’s own dog! Apparently he had a beloved setter whom he walked around town regularly. One day the setter got loose and ran up on a train trestle crossing the James River. Tragically, a train was coming! The dog realized it, but didn’t have time to run off the trestle! Apparently several witnesses saw the dog panic, running wildly back and forth between the trestles, and they all thought he would be killed instantly!  However, at the last moment, Tom’s dog went to the very center of the tracks, laid down flat between the rails, and the train ran right over him! When the train cleared the trestle, the townspeople ran onto the bridge, expecting to find the worst. Instead, Tom’s dog jumped up to greet them seemingly unharmed! What a miracle!

Please share the next chapter of my story of Thomas P. Kerse as I get to tell you about my amazing discovery of another blog about what was once his boat–the Lady Jane! Thanks for joining me in my family stories, have a great week, Helen 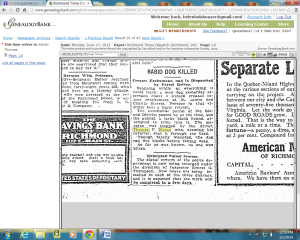 One thought on “Thomas Philip Kerse– Irish Cop like his Dad–52 ancestors in 52 weeks!”