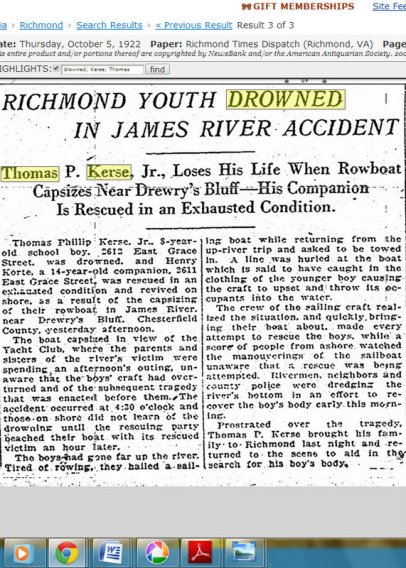 My Uncle, my mother’s big brother, drowned when he was only 8 years old! The picture above is one of only two I have of him , and he looks much  younger than eight. His name was Thomas Philip Kerse, Jr. but they called him Bucky.

My maternal grandfather, Bucky’s father, Thomas Philip Kerse, (pronounced Kearse) b.1884,   was the son of an Irish cop and an Italian businesswoman.  I understand he was passionate about life–as the Irish and Italians have a reputation for being!  His wife, Katherine Steptoe Houchins, born in 1883 in Patrick County,Virginia, was a nurse and the granddaughter of a “Virginia Langhorne”– a name associated with old money and old Virginia families.   Although he was a police officer, like his father and grandfather, she had the reputation as the stronger one, the steadier one. Together they had seven children–one boy and six girls. For my grandfather to lose his only son–any child of course–had to have been devastating!  My mother was only four years old when her brother drowned, but she talked about it all of her life, so I know it impacted her life experiences and perceptions immensely. We lived only a half mile from the James River, near where he drowned, but  Mom’s strictest rule was that we NEVER go to the river without adult supervision!

The drowning must have seemed even worse to my grandfather because he was a boatman –a Captain!  He was a police officer in Richmond,Virginia, but he also owned a yacht in which he took parties on excursions–and held events for charity. He raised his children on the water–making sure they were all good swimmers. We grew up listening to stories of the family’s adventures on-board their marvelous boat “The Lady Jane”. In fact, according to the newspaper articles above, Bucky drowned right in front of his family, but they had no idea the tragedy was going on as they were having fun at a social gathering! Can  you imagine how wracked with guilt they must have been–how haunted by all the  “If only…” and “I should have…” thoughts and questions?  The newspaper says my grandfather was was “prostrated”!  Their beloved son drowned–life can throw wretched things our way.

And what of the 14-year-old boy who was with him? He was a child himself, out for a day’s fun with a friend. My mother said he tried to keep Bucky above the water, but the hook that the sailors had thrown to tow them in, had caught Bucky’s clothes, capsized the little dinghy, and Bucky’s friend Henry was in danger of drowning himself! My mother never mentioned him by name, and I never knew his name until during my genealogical research, I looked up the incident in newspaper archives on genealogybank.com. So, I looked further–and sure enough, I could follow Henry’s life through the papers of Richmond,Virginia–he excelled at school, married, had children, and held many applauded volunteer leadership positions in Richmond,Virginia, where he died in 1963.  Did he always remember? Did he speak of it?

If we look at the  U. S. Censuses, as we genealogy folks are apt to do, we can find even more pieces of the story. We can clearly see that the two families are living across the street from each other when the boating accident occurs–the boys were neighbors and friends, but we can also see that by the 1930 census, they had both moved away–to different parts of town. New starts? bad memories–who knows?

We also see a bit of other interesting information on the censuses. Henry’s father and mother were German–they had only come to America in recent years. The accident was in 1922– WWI, where we fought the Germans was just over in 1918– were there hard feelings among the ethnicities of the German, the Irish, and the Italians? I never thought of any of this until I started researching my family’s genealogy–perhaps if I had, I could have asked some questions.

After all is said and done, I’d like to think that my Uncle Bucky was his friend’s guardian angel perhaps–helping him move forward through his life, and that he watched over his parents and sisters as well.